Borussia Dortmund fans and investors aren′t on the same team | Business | Economy and finance news from a German perspective | DW | 13.05.2011

Borussia Dortmund fans and investors aren't on the same team

Borussia Dortmund has dominated the Bundesliga this season with a refreshing brand of youthful soccer. But while fans have been captivated, investors in Germany's only publicly listed soccer club are less impressed. 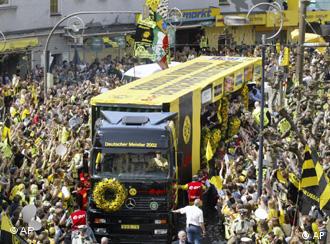 BVB fans, without shares, have plenty to celebrate

If Borussia Dortmund, also known as BVB, could only attract investors as it does fans, the club arguably would be Europe's wealthiest. Sadly, it doesn't and isn't.

Even after winning its seventh Bundesliga title, which the club will be celebrating intensively over the coming days, many of the club's investors see more profitable opportunities elsewhere.

On the first day of trading after Borussia Dortmund's title was confirmed in a victory over Nuremburg two weeks ago, the club's share price plunged. This was endemic of the sad investment history of Germany's first publicly listed soccer club.

Borussia Dortmund floated on the Frankfurt Stock Exchange in October 2000 to much fanfare. Although publicly listed soccer clubs had long been common practice in other major European leagues, notably in England, Dortmund was the first in Germany to do so.

The initial euphoria, however, was quick to subside. The start price of 11 euros sank to 10.5 euros by the end of the first day of trading. And the downward spiral continued as BVB's fortunes on the pitch took a nosedive. The initial influx of cash was quickly splurged on high-profile and highly-paid stars. 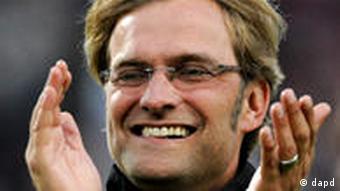 Klopp has put together a winning team

The hope of a successful return on investment after winning the league in 2002 was followed by years in no-man's land in the table. The club was sinking in debt and, in 2005, was just hours away from bankruptcy.

Looking back, club president Reinhard Rauball admitted that floating the club was not the right course of action. "Yes, of course it was a mistake. However, I do believe that without the flotation Borussia Dortmund wouldn't be in the position it is in today," Rauball said.

"Of course, the people who bought shares at 11 euros a piece won't be happy with mere sporting success. But in the long-term, when the foundations are set, I do believe it can be a success story."

Dortmund was twice on the verge of sporting ruin before Rauball stepped in. "Dortmund was clinically dead - it was a huge effort to get the patient breathing again. And I believe that the club's history and tradition played an important role. Anyone who was able to help did so," he said. "There was a lot of luck involved, too. If it had happened two years later during the global financial crisis, we wouldn't have survived."

Rauball credits much of the success in restructuring the club's finances to the club's current CEO, Hans-Joachim Watzke. When he took over in 2005, Dortmund had debts of around 120 million euros ($170 million) and was paying 17 million euros a year in rent to play in a stadium the club had pawned off to pay back its short-term loans.

Under Watzke's stewardship, the club has bought back the stadium, built a state-of-the art training center and focused on bringing through young players instead of overpaid stars. Watzke is now reaping the rewards.

"After we had reestablished a sound foundation on which to rebuild the club, we were able to push the reset button and redefine Borussia Dortmund," he said. "The new aim is maximum possible sporting success without going into debt. We are not able to splash out large amounts of money, but can spend our funds wisely and efficiently." 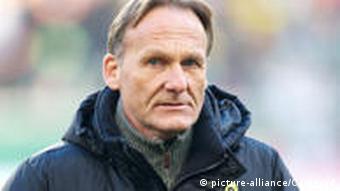 CEO Watzke has struggled to offer an attractive stock investment

Watzke also changed the club's shareholder structure. Most of the large institutional investors are gone, with 82 percent of the shares now owned by diverse minority shareholders, mostly fans.

At the lowest ebb, the value of the shares plunged to around 1 euro each. But now with fans in control, the pressure to sell is off. The share price breached the 3-euro barrier for the first time in years this season.

The shares are on the way to having a fair valuation," Watzke said. "For the first time ever, a lot of people have earned money with Borussia shares."

Yet financial experts remain wary of the value of investing in a football team. Borussia Dortmund is the only German club listed on the Frankfurt Stock Exchange. And there's a good reason for that, according to analyst Freider Barten from Kalliwoda Research.

"The company doesn't pay any dividends, and I can't see that this will change in the future," Barten said. "And there is a conflict of interest between fans and investors. Fans want sportive success and fun - they want the management to buy the best football players."

While investors, too, want clubs in which they have invested to be successful because success increases revenues, they prefer not to buy top players to avoid increasing costs, Barten contends. "They just want a profitable company and good share performance," he said.

Sell while the going is good

Surely winning the Bundesliga title and getting a shot at the Champions League will lead to increased ticket sales, higher sponsorship revenues and, in general, better profits. So why did Borussia's share price fall after it clinched the German championship?

Barten says the club's success had already been factored into the share price more than a month ago. "We saw the share was going down 18 percent," he explained. "It was because shareholders already knew this market information - that they will get the title - and they realized their profits."

It seems many Borussia Dortmund investors decided to sell while the going was good. They saw no need to wait and see whether the club will survive the group phase of the Champion's League next season. Nor were they overly eager to keep cash flowing to support any big names it might want to buy.

Matthias Schrade, an analyst with GSC Research, is also wary of recommending the risky, uncertain world of investing in sports for many of the same reasons as Bartel - but for another particular one.

Germany, he says, has a ruling that prevents control of listed clubs from being taken over by investors. "This forces clubs not to be a classic shareholder company but a so-called KG AA, which is a kind of [company with] restricted shares. This system doesn't exist outside of Germany, as far I know," Schrade said.

"So this means that even if an investor owns 100 percent of the shares, he doesn't control the company, which makes takeover speculation completely irrelevant."

While both analysts believe there are better investment options, they concede that shares in a sports team can serve a different, less traditional purpose by making fans feel part of their soccer club.

When Karl Hausamen, an avid Dortmund fan for over 30 years, had the opportunity to buy shares in his beloved club, he jumped at the chance. "It makes you feel part of the club," he said. "And that's a good feeling."

Dortmund is a club that has always cherished its working-class roots in the local community. That image was threatened when it embraced what fans, especially of other clubs, call the ugly side of football: capitalism. Yet most supporters, including Hausamen, never bought their share certificates for the money.

And they are likely to hang on to them for good or bad. "I thought to put them in a frame," Hausamen said, "but after they went down and down, I didn't want to do that."

Dortmund’s seventh German championship was unlike all the others in the club's long history. The men in yellow and black not only won the league, they played arguably the most entertaining football in Europe. (02.05.2011)

If it ain't broke, don't fix it, runs an old adage. But Bundesliga champions-in-the-making Dortmund are going to have to do some clever wheeling and dealing to reestablish themselves as a perennial powerhouse. (20.04.2011)

Many soccer fans will be incredulous that Borussia Dortmund are on their third coach of the season. But supporters of the Rhine valley giants will be less surprised. The club has a reputation for short coaching tenures. (14.03.2007)