This year's Deutsche Welle Blog Awards - "the BOBs" - were presented on Tuesday at the Global Media Forum 2012. The first prize went to an Iranian blogger repeatedly arrested for his critical articles. 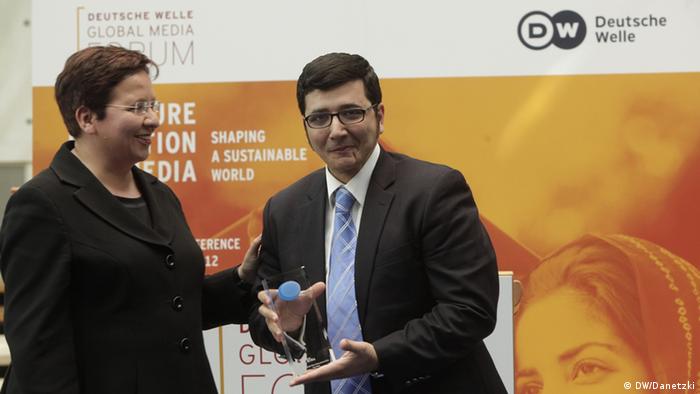 "They give minorities a voice and claim their right to free speech," said Deutsche Welle Editor-in-Chief Ute Schaeffer, addressing the six Blog Award winners at the ceremony on Tuesday. "That is a huge challenge. Deutsche Welle wants to give you courage and show you how important your work is. You're doing a great job!"

The winners of DW's eighth BOB awards were chosen from more than 3,000 proposals by an international jury. All the prize winners were in Bonn on Tuesday to accept their prizes as part of the Global Media Forum.

The category "Best Use of Technology for a Social Good" was won by the operators of "Harassmap," an Egyptian web portal where women can anonymously report sexual abuse incidents, which are then pinpointed on a map. The map draws attention to an important, but often overlooked issue in Egypt, where there is very little awareness of how many women are affected by abuse. 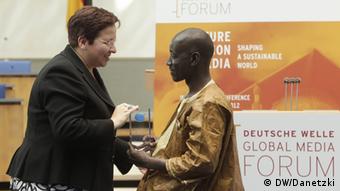 More than 500 people are involved in this fight against the increasing violence against women in the North African country. "A lot of men are involved too, just because they are shocked by what is being done to Egyptian women," said Rebecca Chiao, one of the earliest participants in the "Harassmap" project.

The prize for the "Best Social Activism Campaign" was won by Syrian Facebook page "Freerazan," which is dedicated Syrian bloggers currently in prison and named after Razan Ghazzawi, who has been imprisoned several times. The prize was accepted by Sherry Al-Hayek, on behalf of everyone involved in the site. "This award is not for the page," she said, "but for the people on the ground, the real fighters."

Wang Bo is constantly treading on thin ice with Chinese censors, and his work is not without risk. Despite this, he described himself as a normal Chinese man who is just lucky enough to be able to draw cartoons and use the Internet. 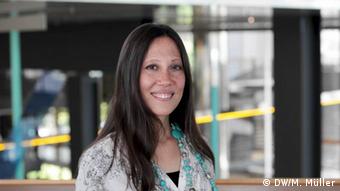 Rebecca Chiao accepted a prize on behalf of Egypt's Harrassmap

The prize for the "Special Topic Award: Education and Culture" went to Boukary Konaté of Mali, who helps his compatriots use the full potential of the Internet. He has been blogging on "Fasokan," both in French and the West African language of Bambara since 2008.

His site is an educational tool, documenting how he gains access to the Internet with the help of portable solar panels and a car battery, and he travels around the country teaching people in rural areas how they can make best use of the Internet. Konaté said proudly that "people are always pleased to see me" when he arrives on his bike with his solar power module.

Special prize from Reporters Without Borders

The special award handed out by NGO "Reporters Without Borders" went to Bengali blogger Abu Sufian, who highlights social injustices in his own country, focussing particularly on the government's authoritarian measures. The jury said Sufian risks his life reporting on extra-judicial executions in Bangladesh. Accepting the award, Sufian said he realized that his work was dangerous - "but there have to be people who take up that challenge. I am one of them." 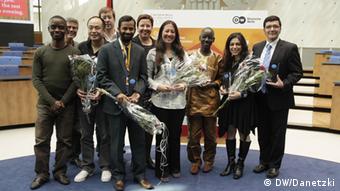 But the jury awarded the 2012 Best Blog prize to Iranian Arash Sigarchi, whose "Window of Anguish" is widely read in the Persian community worldwide. Sigarchi has been arrested several times for his blog posts, and was recently sentenced to 14 years in jail, though that was later commuted to three years. But neither his jail term, nor his cancer, has broken his will to write.

"For us, Arash is a man who bridges the gap between citizens and journalists," said jury member Arash Kamangir presenting the award. He said that Sigarchi demonstrated a political blogger's essential trait - he was able to simultaneously analyze his country's issues critically, objectively and soberly.

Sigarchi now blogs from the US, though he constantly keeps up with the situation in Iran, and he says he has no fear of the "Halal Internet," the clean Internet the Iranian government uses to cut off its people from the World Wide Web. "They can't stop the movement," he says. "Not even in jail. They can't stop me."

"Culture. Education. Media - Shaping a Sustainable World" - this is the theme of the 2012 Global Media Forum, organized by Deutsche Welle. Guests from around 100 countries will discuss global problems and solutions. (24.06.2012)

The BOBs: Window of Anguish and Bridges of Hope

Deutsche Welle presented prizes to the winners of its international Blog Awards, The BOBs, on June 26 during the Deutsche Welle Global Media Forum. The top award went to Iranian journalist and blogger Arash Sigarchi. (26.06.2012)