As Christmas nears, board game sales are rising - despite the finance crisis and the omnipresence of computer games. One private board game maker in Germany is counting on local appeal to market his medieval game. 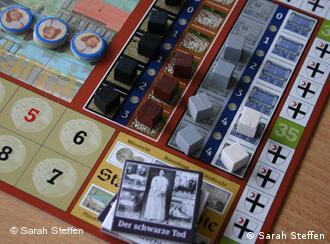 Board game sales have picked up by one percent compared to last year - since they're often purchased as gifts, they tend to react relatively slowly to a recession. With Christmas around the corner, overall sales are expected to pick up even more.

Board game creator Horst Rokitte has a unique strategy to hop on the bandwagon: He dove into the city archives and came up with a game based on the real medieval history of his hometown Attendorn in western Germany.

For independent game developers, just having a good idea isn't enough. "It's very hard to get published by a company," Rokitte told Deutsche Welle. "They get roughly 700 games proposals, they might look at 20, and two are published. 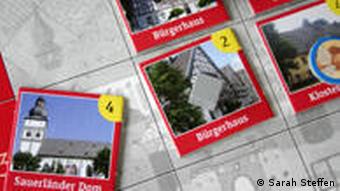 "It's especially hard if you don't have a well-known name," added Rokitte, who works full-time as an adult educator and spent two years developing and producing his game Attandarra on the side.

For love of the game

Without the backing of a major publisher for Attandarra - as his town was known during the Middle Ages - Rokitte took matters into his own hands and started promoting it locally.

"When I added the local reference, I had to rely - in terms of marketing - on the pre-sale of the game in Attendorn. Once there was a certain number of pre-sale orders, I decided to publish it myself," said Rokitte.

He ordered 1,000 copies of Attandarra, and stored them in his garage. After publishing the game in March, he's sold about 480 copies so far. That's not bad for a self-publisher, said Rokitte.

According to Rokitte, prototype testing is essential to uncover flaws. "It's important that the game is tested when you are not present, because otherwise you are inclined to explain your game and direct the players," said the game maker. 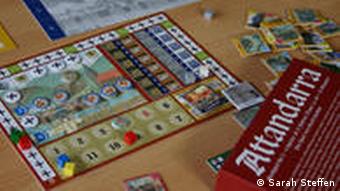 Games undergo a long testing period before they're sent to market

Before getting started, Rokitte talked to the town's registrar to make sure he got his history right. The Black Death is one of the historical events that players have to watch out for during the Attandarra game. Getting permission from the archbishop to mint coins in the 13th century and receiving the official town charter in 1222 are also highlighted.

The game revolves around erecting buildings, and bringing more citizens and money into town. Each player has their own board where they can build houses, castles and city gates. Meanwhile, the main board serves as the center for the players' pawns, the town citizens, wealth and resources.

The cards used in Attandarra show a lot of buildings that still exist today. "You can still see most of them in town," said Rokitte. "At the beginning I used neutral buildings, but later on the castle took on a specific face" - namely, Schnellenburg Castle, which can still be seen in Attendorn.

Rokitte went out on a sunny day and took pictures of the most important buildings in town, including the big Sauerlaender Cathedral, Old City Hall and, of course, Schnellenberg Castle. On some of the game cards, old buildings that no longer exist are represented by sketches Rokitte found in the city archive. 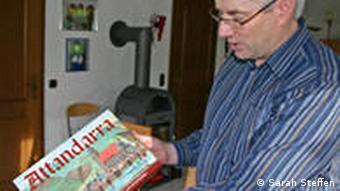 Horst Rokitte, born in Attendorn, shows the old drawing on the game cover

But it's not only about reminiscing over medieval architecture: Rokitte has also added an economic element to the game.

To erect any type of building, players need resources like clay, wood, brick or glass. Since glass is scarce, it's the most valuable resource; clay is cheap and doesn't count for much at the end of the game.

For a couple years now, Rokitte has been meeting up with a small group of fellow games inventors to discuss their latest ideas. Since Attandarra came out, Rokitte is already working on next games that he hopes to publish - this time, with a publishing company.

Graphics will take a backseat to game design, story

The electronic entertainment industry's heavyweights showed off their shiniest toys at the Games Developers Conference in Cologne. Soothsayers of the business also tried to predict the future of gaming technology. (21.08.2009)

The Games Convention in Leipzig, which opened on Friday, is the only convention in Europe that concentrates solely on online and mobile games. The online games market is booming, in spite of the tough economic times. (31.07.2009)