The Europa-Park theme park in southwestern Germany has reopened after a major fire. After hundreds of firefighters put out the blaze, the site was able to welcome visitors for a regular music event. 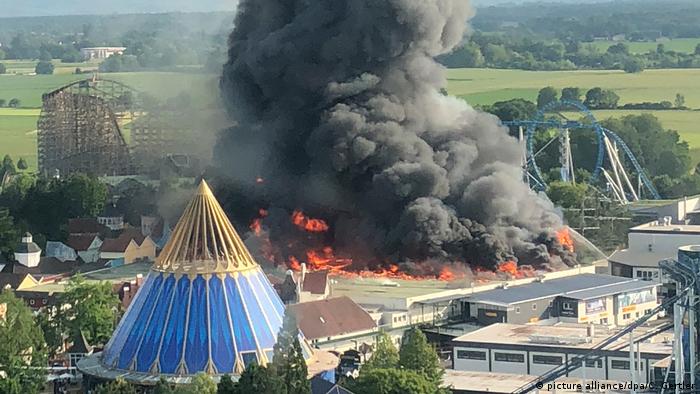 A televised music show went ahead on Sunday, but parts of Germany's largest amusement park remained unusable following the huge fire which had taken well into Saturday night to extinguish.

Europa-Park attracts about 5.6 million visitors a year and, according to police estimates, some 25,000 people were at the park when the fire broke out. It is likely to have started in a warehouse and spread to the nearby "Pirates of Batavia" attraction. The cause of the blaze is not yet known.

Europa-Park's managing director, Michael Mack, said the Norway-themed area had been "completely lost," however many others had not been damaged.

Seven firefighters were injured due to smoke inhalation.

Three of the park's 100 attractions remained closed on Sunday.

- A building described as a warehouse caught fire early evening, prompting the evacuation of several attractions.

- Residents of Rust were asked to keep windows and doors shut, according to the newspaper.

The park has 15 European themed areas in which visitors can explore a minature vesion of several countries, from England to Russia.

The family-owned amusement park has over 100 attractions and fairground rides and includes five upscale hotels and camping grounds, according to its host town, Rust.

It ranks as Europe's second most-visited amusement complex - after Disneyland Paris. Opened in 1975, it now spans 995,000 square meters (235 acres) and is divided into 18 themed areas.

Employed on site are 3,600 people. On its corporate website, Europa-Park says its attractions indirectly secure 8,500 jobs in the region.