Blame it On the Bratwurst

It's official. A new study has found that the tubbiest Germans are those in the eastern state of Thuringia, coincidentally also home to one of the country's most popular sausage varieties. 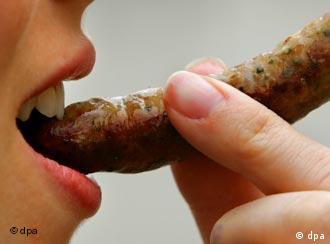 Past the lips, straight to the hips

The study conducted by the German Society for Nutrition has found that around 800,000 men and women in the former communist eastern German state are overweight and at least 10,000 are considered obese.

The report lays the blame for the state's propensity for tipping the scales squarely on the region's hearty, calorie-rich food. No other cuisine in Germany can boast as many meat dishes as Thuringia.

Chief among them is the famous "Thüringer Bratwurst" or Thuringia fried sausage, a 15 to 20 cm-long sausage traditionally fried in a variety of spices and a dash of beer and served in a bun with mustard and potato salad.

The "Thüringer Bratwurst," it's said, is not just a dish for the average Thuringian, but a way of life. Stands selling the delicacy are ubiquitous in the region and on average an adult Thuringian, it's believed, consumes about two or three a day.

And as the saying goes: "past the lips, straight to the hips."

Alas, the gastronomic delight comes at a huge price. According to the study, treatment of problems linked to obesity costs the state of Thuringia 700 million euros a year.

The Battle for the Nuremberg Bratwurst

People in Munich tend to be content with their weisswurst and sweet mustard, but one restaurant owner wanted to offer more -- and was dragged to court for selling "Nürnberger Bratwurst" that didn't come from Nuremberg. (Nov. 23, 2005)

The Triumphant Return of the Currywurst

Legal wrangling had banished Berlin's culinary trademark, the currywurst, from the Brandenburg Gate area. But the sausage has returned, delighting tastebuds and expanding waistlines in the city center again. (June 21, 2005)