Beyond punctuality: surprising German habits at the office

Sparkling wine and cake at work? As much as Germans are renowned for their punctuality and frequent, well-organized meetings, beyond the stereotypes, there is an unsuspected festive culture in office life in Germany.

If you arrive late at the office when you start a new job with fixed schedules in Germany, your colleagues will notice. In some cases, two minutes late is already way too late.

Although the German cliché of punctuality still applies in many workplaces, there is something else that will not go unnoticed during your first week at the office: Did you bring cake for everyone with you? And how good was it?

Cake is key to fitting in at a new workplace.

Beyond being a newcomer to the team, there are many reasons to celebrate in a German office, whether it's a colleague's unusual accomplishment, anyone's birthday or the two-month trip someone is taking: That all calls for cake and "Sekt," or sparkling wine.

Incidentally, the person celebrating their birthday is also the one in charge of providing the treats for the rest of the office.

Even though Germans are not renowned for small talk, those celebratory office breaks are moments where everyone manages to talk about stuff that's not related to work – most often how good the cake is and how it was made.

And although alcohol is involved, the "party" doesn't go on forever. Once everyone is done drinking their glass of sparkling wine and eating their cake, it's time to head back to work.

You'll find more from Meet the Germans on YouTube or at dw.com/MeettheGermans. Get a humorous take on German culture with DW's series of cartoons, "That's so German." 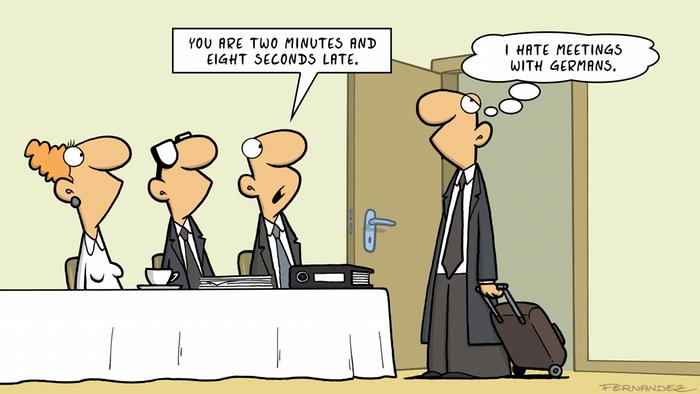 Dos and don'ts when celebrating a birthday in Germany

In Germany, wishing someone happy birthday on the wrong day could get you in big trouble - and getting old can also get expensive. Join Kate Müser on Meet the Germans for more birthday dos and don'ts. (14.06.2017)

German cakes may be world-famous, but which varieties are the most popular? Meet the Germans host Kate Müser heads to a cake shop to find out. (05.04.2017)