The winners of the Deutsche Welle Blog Awards were announced Thursday. The prize "Best Weblog" was awarded to Ushahidi.com, a team of Africans and Americans who developed a community-based software program. 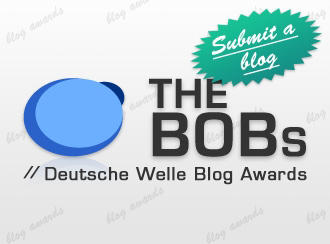 This year was the sixth year the BOBs have been awarded

“I’m really happy about the award, and I think the entire Ushahidi Team will be excited as well,” said Victor Miclovich.

Miclovich is one of the software developers at Ushahidi.com. "Ushahidi" is a Swahili word meaning testimony. The Web site offers open source software that each user can freely download and change as needed.

Ushahidi was first developed to track instances of violence following the 2008 elections in Kenya. The “crowdsourcing” platform has since been used following disasters like the recent earthquake in Haiti. Users can send information via text messages or e-mail to Ushahidi about where victims are located or where help is needed. By collecting information from users on the ground, Ushahidi serves as an interactive map that can help aid organizations plan and execute their efforts.

The jury members “were impressed by this great project that can be used in Haiti and elsewhere in order to help people,” said Gabriel Gonzales, Project Manager for the Deutsche Welle Blog Awards and moderator of the jury panel.

The Deutsche Welle Best of Blog Awards (called the BOBs) honor outstanding weblogs, podcasts and videoblogs from throughout the world. The jury as well as user voters select winners in 11 languages and 17 categories each year, making the BOBs the biggest international prize for bloggers. 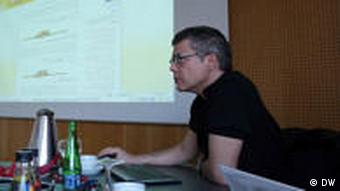 The 12-member jury consisting of journalists, media specialists and bloggers from 11 countries chose Ushahidi by a narrow margin. A Chinese weblog by a young author named Han Han was in close contention.

Ushahidi's core team consists of 20 members, most of them from Africa and the US. But the site has many volunteers throughout the world helping to develop and distribute Ushahidi's software further.

Victor Miclovich is surprised Ushahidi received an award for best weblog, since “we actually don't run a blog. We developed software which lets users generate content. That means we collect information from people, and the people write the entries.” But this principle was what ultimately convinced the jury.

The usefulness of Ushahidi's platform was evident following the bloody unrest in Kenya related to the 2008 presidential election. Thousands of people sent e-mails and text messages to the blog's operators about what was taking place across Kenya. Eyewitness accounts were combined with the coordinates of the events to develop an interactive online map with categories including demonstrations, looting, and deaths.

In the two years since, the site has developed in many new directions. “Ushahidi is a platform that people can use independently on their own computers,” said software developer Victor Miclovich. “We do not help them in the sense that we drive out and set everything up for other users. People develop the software in the ways that they need and want.” 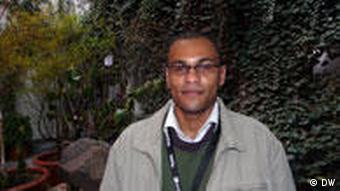 Victor Miclovich has worked for Ushahidi.com for about five months

Users followed elections in India and Mexico last year by using Ushahidi, and a world map for outbreaks of the swine flu virus exists already. But Ushahidi isn't reserved just for catastrophes and negative events. In Kenya, people also use the site to hone in on wildlife in national parks, and the “Zombie Reports” site uses the platform to show where the undead purportedly roam the Earth.

The jury intends the award to honor Jaghob’s engagement in Iran. “She is one of the few critical journalists still working in Iran,” said Morillon. Jaghob writes openly and courageously about the interrogation techniques employed by the government and the conditions in Iranian prisons. She has already been arrested three times, and her husband, who is also a journalist, has been sentenced to seven years in prison.

The young authors travel throughout Brazil to research their entries, while presenting the information they collect in an easygoing, entertaining way. In one moving video entry, they follow a river to its source to discover from where the river’s pollution stems.

A forum for Morocco

The jury and user voters agreed on this year’s winner in the category Best English Weblog. Both awards went to Talk Morocco, a multiple author blog that promotes open discussion and debate on a variety of social issues in Morocco and the Diaspora.

In honor of March’s International Women’s Day, the site has recently featured a series of articles focusing on women in Morocco, including entries like “Restoring the Rights that Islam Dictates” and “Making the Life of a Woman Worth Everyday Consideration.” The blog offers a forum for its authors to discuss topics like these while avoiding some of the prevailing press restrictions in Morocco.

Special prize to be given for climate change. Users can go to www.thebobs.com and vote for their favorite. (12.03.2010)

Deutsche Welle Starts the Search for ‘The BOBs’

The sixth international blogging competition – The BOBs – will feature a special prize category for climate change. Jury member Ai Weiwei: “Blogs have been the most efficient tool for the democratic movement in China”. (07.12.2009)

The BOBs: Awards Ceremony Without Bloggers from Cuba and China