Berlin's kebabs are a culinary universe

There's a rumor that the döner kebab was invented in Berlin. It's probably not true. But anyway the city is over the döner. The variety of Mid-Eastern meat sandwich in the capital is now basically infinite.

Earlier this week, Thilo Sarrazin - the same one who wrote the infamous book about Germany's immigrant communities, entitled "Germany Does Away with Itself" - was kicked out of a kebab shop in the Kreuzberg district of Berlin.

I lived in Kreuzberg for eight years, and I cannot imagine anything worse. The thought that I might be barred from even one of this area's myriad delicious Anatolian/Mid-Eastern meat sandwich emporiums - depriving me of a staple of my diet - is unspeakable. It would certainly put me off writing a book that could offend the Turkish or Arab communities in any way. 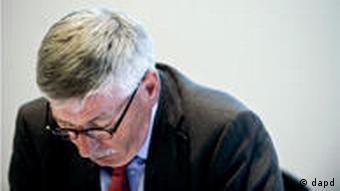 Cheer up, Thilo, there are plenty of other kebab shops in Berlin

I don't cook much, you see, and I live within walking distance of several gastronomically unique kebab shops. If you come from London you are probably thinking I should be dead by now. But Kreuzberg and Neukölln offer such a wide choice of kebab that it cannot be compared to the salty-elephant-leg-salmonella-dog-meat sandwich available at closing time outside any British nightclub.

In fact, one of the keenest pleasures of living in Berlin is taking a British person to a Kreuzberg kebab shop for the first time. Just watch the tear form in their eye when they try their first shawarma. It's heartbreaking.

And no wonder. The shawarma is a magnificent Arabic sandwich, generally served in pita bread containing - apart from some tender, citrusy meat or other - some form of potato. Like the döner, the meat is shaved from a rotating spike, but it's easily distinguishable, because the individual slabs of meat stick out from the mass.

Then there's the köfte, a spiced meatball native to several different cultures, but in Berlin it's usually served by Turks in small, finger-sized sausage-shapes. In many good köfte joints, you see Turks eating it with a fork from a plate with a neat side of rice and salad. But, helpfully, köfte shop owners have also pioneered the "köfte burger" for people like me.

Köfte is a broad term, and some köfte outlets, however unassuming they may appear, are extremely particular about where the meat comes from, and will import it only from certain regions of Turkey.

A more refined meal is the well-known sis, or shish kebab. Here you get finer, leaner individual morsels of lamb, also skewered. It's frankly too posh for me. For all the texture of those fine cuts, and the delightful smoky flavor, it's less satisfying in the same way that the adana is too satisfying.

An intriguing balance is struck by the slim and sophisticated tantuni. So far, I have only been able to find one purveyor of this obscure, pocket-sized treat. It resembles a large taco filled with strings of fried lamb and onions. Though it is always wrapped up tight (in a flat dough called yufka), you get a segment of lemon and some green chilies with which to season it. Parsley seems to play an important role in its preparation, and it has a complex flavor all its own. 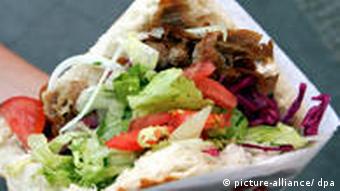 It's so simple, and yet so complex

These are, roughly sketched, some of my favorites. What unites all kebabs, of course, is the fact that they are impossible to eat with dignity. The salad always falls out of the top and the sweet-smelling grease always funnels down your palms. No matter what type of bread you get - pita, pide, dürüm, yufka, or the more Germanic Fladenbrot - the best you can do is clasp your hands around the sandwich in an inadequate cup shape and hope to keep the salad parts from landing in your lap.

But even then, the grease always finds a way down your wrists and up your sleeve. Some people are more skilled than others, but it makes no odds in the long run.

Perhaps the ultimate test of your kebab control is the Wok Kebab, a unique specialty of the Oregano pizza shop on Oranienstrasse - just round the corner from Hasir, where Thilo Sarrazin had his fateful encounter.

This astonishing kebab - apparently an original creation - comprises a cornucopia of meat and vegetables fried in a wok and wrapped in flatbread. It is superb, but extremely juicy and it makes a mockery of the small paper bowl and napkin it is served in. By the time you've filled your face with it, you have been reduced to the state of a toddler left unsupervised with spaghetti bolognese.

After a Wok Kebab, there is no point trying to maintain your poise. You have joined the masses.

Berlin rudeness? Much ado about nothing

Admittedly, Berlin isn't exactly famous for its friendliness. Just try taking a bus ride through the capital. But even the city's rude bus drivers can be good for an occasional surprise. (15.07.2011)

It's definitely not a sausage. It's a phenomenon. Otherwise Berliners wouldn't have been crazy enough to dedicate an entire museum to the legendary currywurst. (11.03.2011)