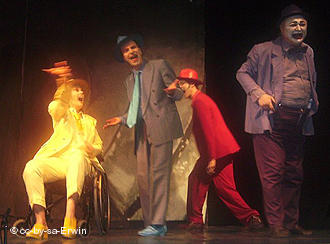 Speaking at the awards ceremony in the western German city of Aachen on Tuesday, Ottmar Steinbicker, head of the Aachen Peace Award committeee, said both recipients stood out for their "civil courage, non-violence and steadfast commitment to peace and human rights."

Steinbicker said both realized that the use of arms can't create peace but that war often led to further escalations.

Television journalist Sonia Mikich said that both the Berliner Compagnie and Marjanovic gave the victims of war, persecution and desperation a voice.

"They champion equal opportunities - both in their private and public lives - independent of nationality, skin color, religion and gender," Mikich said.

It's the first time in the award's history that a theater company and an activist from the Balkans received the prize.

The Aachen Peace prize has been awarded every year since 1988 to people who work for peace and understanding in the world. The prize comes with an award of 2,000 euros ($2,850) and is presented every September. Previous winners include Jupp Steinbusch and US Congresswoman Barbara Lee.

Theater with a strong political message

The Berliner Compagnie is based in the German capital's alternative Kreuzberg district. It was set up in 1981 by actors Jen-Theo Jost and Gerhard Fries to protest against the stationing of Pershing II and cruise missiles in Europe.

The group has created 23 productions so far for over 2,000 performances. The plays have tackled issues as varied as arms proliferation, poverty in Africa, the Israel-Palestinian conflict, the German army in Afghanistan and other conflicts around the world.

In her acceptance speech, Jost criticized the "dumbing down" of theater.

"We call for theatre that brings the most important political issues on stage and helps illuminated the links between them," she said.

Pushing for peace in the Balkans 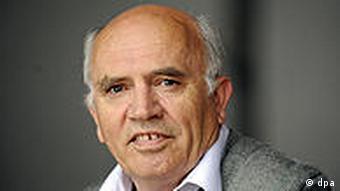 Zdravko Marjanovic, 68, has been campaigning for reconciliation in the former Yugoslavia for the past 16 years.

A retired electrical engineer, he founded a peace group and a newspaper in 1994. Two years later, he organized the first meetings between Muslims and Serbs in Bosnia.

In 2003, Marjanovic founded a platform for reconciliation between Bosnians, Serbs and Croatians.

In his acceptance speech, Marjanovic said working for peace meant finding the causes of war. This includes poverty as all forms of injustice and all artificially created barriers between people.

He also warned that the indifference of many people to the problems around them remained a big problem.

A Berlin theater company and a Bosnian-born Serb have won the 2009 Aachen Peace award for their efforts to resolve conflicts and raise awareness. (08.05.2009)