Berlin students are selling old chairs to finance projects | Germany| News and in-depth reporting from Berlin and beyond | DW | 06.03.2010 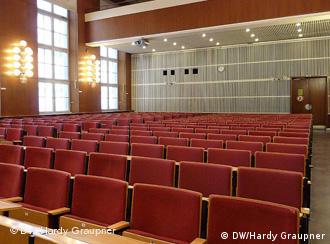 Pick a seat of your choice!

The vociferous protests of tens of thousands of students held last year still ring in many Berliners' ears.

They took to the streets and staged university sit-ins to campaign for better degree courses, the abolition of tuition fees and improved student-teacher ratios. They also called for more money to create a more efficient education system.

The protests involved students from Berlin's many educational institutions, including the renowned Humboldt University. But the German capital belongs to the poorest of Germany's 16 states, and with the economic crisis still making itself felt, the kind of additional resources for education called for by the students is unlikely to be granted by Berlin's senate. 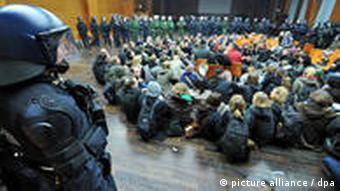 But a group of resourceful students from the Humboldt University's faculty for economic sciences have developed an initiative to raise badly needed funds for various study projects.

As the faculty's interior is currently being replaced by new rows of chairs, lamps and other features, some enterprising students had the idea of selling the old seats to alumni and other friends of the faculty.

Eva Heberer is among the students who have thrown their weight behind the so-called Platzstiften, or 'buy-a-seat' campaign. "During the student protests I saw that people destroyed stuff in the university," Heberer said. "It always costs money to repair the damage, and I thought that Platzstiften would be a much better idea than occupying a lecture room and screaming."

The campaign has already delivered well over 20,000 euros ($27,000) into university coffers, money that will come in handy for a number of projects.

Heberer said the faculty's Masters and senior Bachelors students give lectures to fellow students for free to get teaching experience. Now the faculty hopes to channel some of the funds from the "buy-a-seat" campaign to these lecturers.

Christian Bergner, student and co-organizer of the scheme, is extremely pleased with its success. "We earn some money with it, and the money goes back to the students," Christian says. "And with the money, more power goes to us students. We can suddenly change things for the better on our own." 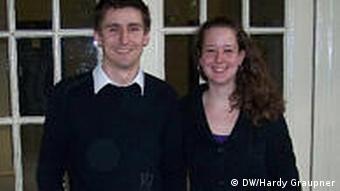 So why would anyone want to buy an old chair from the faculty's main auditorium? The gratitude of current students is probably not enough to induce alumni to open their wallets.

Heberer and Berger say there is more in it for the donors. Buyers get invited to special events or dinners with faculty professors. In addition, signs with the buyers' names and enrolment dates will be fixed to the new chairs installed in the space once occupied by the chair they bought.

But the potential buyer's fame will not be eternal. In ten years, the scheme is expected to be revived, and the chairs will be re-sold to fresh alumni.

The students' fund-raising project has the backing of the faculty management. Professors and students believe that it won't be long before the concept is adopted by student groups at other universities across the country.

In Germany, you can study almost anything -- and often in English. Many universities are switching over to Bachelor and Master degree programs, so studies completed in Germany are gaining in international currency. (05.02.2009)