An eatery in downtown Berlin serves recipes from the bygone communist era. East German cuisine doesn't usually get much attention, but the simple food is a reminder that quite a lot can be made from very little. 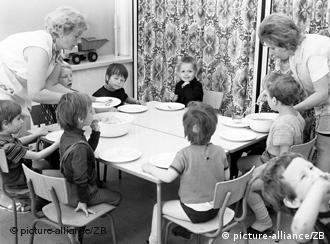 With few ingredients available, East Germans had to get creative in the kitchen

"I've never been to any place like it," said Sam, a Berlin tour guide, as he finished his Eisbein (pork knuckle) at Domklause. The Berlin restaurant opened last autumn. For the past two months, Sam has brought tours to Domklause three times a week, and has literally tried everything on the menu. Originally from the UK, Sam says he finds the meals at Domklause nice and average, adding, "there's nowhere I can find just East German food."

Domklause, the gastronomical sidekick to Berlin's GDR Museum, sports chic backlighting and sleek black tables with white chairs. So where is all the gaudy furniture reminiscent of East German cafes and living rooms?

"It's completely bourgeoisie," said Sam of the restaurant. "It's nothing like the GDR. But I don't think it would be so inviting if it had the former style." 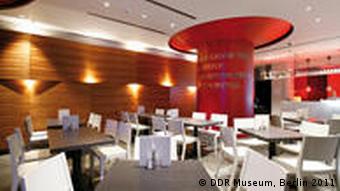 The restaurant doesn't look anything like a GDR living room

According to spokesperson Melanie Alperstädt, the ambience of Domklause was specifically designed to not be nostalgic for the East, simply "because Germans tend to think that nostalgia is a critique of the past," said Alperstädt.

The result is authentic communist-era dishes in a modern setting; sentimentality comes only with the taste. "In the museum you can experience the GDR, you can touch the exhibits, you can see original furniture, but here the focus is on the dishes," added Alperstädt.

From 1979 to 1992, an exclusive restaurant with the same name was located in nearly the exact same spot - across from the Palace of the Republic, which was the seat of the government in the German Democratic Republic. Welcoming state guests and visitors from the West, it dished out hearty GDR cuisine, like the Jägerschnitzel of the East - breaded sausage nestled in a bed of pasta and tomato sauce - a far cry from the savory escalope found in the West.

Domklause's former sous-chef, Hans-Jürgen Leucht, now presides over the newly refurbished establishment as head chef. "We've got a contemporary witness who is also a chef, so it's perfect," said Alperstädt.

Stretching the entire length of Domklause's southern wall is the mural "In Praise of Communism," painted by Ronald Paris in 1970, which was salvaged by the GDR Museum from the soon to be destroyed Office for Statistics building in East Berlin. Traditional kitschy slogans from the GDR food industry wrap around the restaurant's interior pillars, making claims like "Fish fingers and canned food - rich in variety and ready to serve." 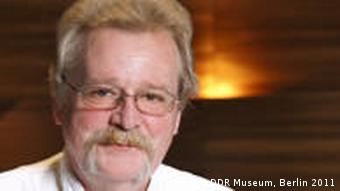 Leucht has been chef at Domklause during two different eras

The menu at Domklause is packed with pages of the culinary classics of communism, including the infamous Ketwurst and Grillettas. Essentially hotdogs and hamburgers, these foods were required to change names in the East, under the ruling of the GDR's gastronomical research institute, so as not to be associated with their counterparts in the West.

Even the drink list has alcoholic artifacts under the heading "Socialist Schnapps" and wines that include Bulgarian Donkey's Milk (white) and Hungarian Bull's Blood (red). They've also humorously added a page titled, "Alcoholic Beverages from NSW (the Non-Socialist World)," which includes whiskey and cognac. And at least today's version of socialist supper offers plenty of fresh salads and even an entire vegetarian section that includes sugar-coated pasta.

Making the best of it

Apart from the glaring gimmick, one could wonder why anyone these days would desire GDR grub when there's always another option. Domklause doesn't claim to offer high-class cuisine, but rather pay respect to GDR recipes that embraced the simple pleasures of uncomplicated dishes.

The scarcity of products and lack of variety in the bygone era gave cooking a creative challenge, and ultimately a unique place among the culinary arts. "They didn't have everything to cook with in the GDR, but with just a few things, they could make some very nice-tasting food," said Alperstädt. 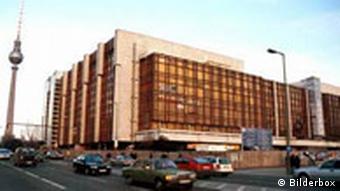 The early Domklause was located across from a GDR landmark

Domklause's clientele is largely made of up tourists, but manager Kim Stender said that at least 20 percent are East Germans, who remember how quickly their favorite staples vanished from the shelves as soon as the Berlin Wall fell.

Susanne Beer, a graphic designer who grew up in the Pankow district of East Berlin, recollects the confusion over milk that seemed to change overnight from 2 percent fat content to 1.5 percent and 3.5 percent. After the collapse of the GDR, Beer "didn't expect that certain products would disappear from one day to the next."

Although she missed Ketwurst in the beginning, along with the not-so-sweet ketchup of the East, Beer was amazed by the variety of foods so abundantly available, like "all the creative flavors of yoghurt, and Kellogg's and spinach and chewing gum!" she exclaimed. "Shops were so empty and then suddenly they were full of food."

Domklause takes visitors back to the empty shelves - but not without creativity. For tour guide Sam, the menu represents a historical and seldom discussed part of the GDR. "It's not extraordinary, though the people always seem to like it," he said.

Berlin is not Manhattan

In Berlin, don't mention the "G" word - gentrification. But is Berlin really about to turn into Manhattan? Deutsche Welle's Stuart Braun has his doubts. (25.03.2011)

East German activist and political rights campaigner Roland Jahn was announced as the new head of the Stasi archives in Berlin. Since 1990, the records office has been open to those who want to find their files. (28.01.2011)

Anti-Semitism in communist East Germany? "We didn't have any of that" is the title of a traveling exhibition on the long-taboo topic of how badly Jews continued to be treated after World War II in the GDR. (23.10.2010)