Berlin May Day rioters held for attempted murder | Germany| News and in-depth reporting from Berlin and beyond | DW | 03.05.2009

Four youths who took part in violent May Day riots in the German capital are in custody on suspicion of attempting to murder police officers, a Berlin prosecutor's office spokesman said on Sunday. 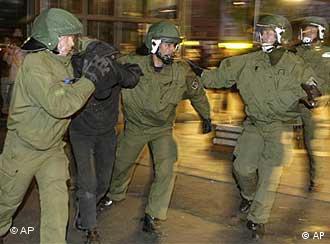 A further 21 youths were still being held on other charges after Friday's events, described by police as the worst rioting in Berlin for several years. The annual violence is attributed to a loose anarchist movement said to have about 5,800 members around Germany.

The four detained youths are alleged to have thrown petrol-filled explosives at police officers in Berlin's left-leaning Kreuzberg neighborhood in the early hours of Saturday.Rioters were also said to have tried setting officers on fire using flammable liquids and matches.

Police chief Dieter Glietsch said no police were injured in the attempted firebombings, but that 273 officers - more than double last year's figure - were treated for other injuries, mostly minor, after brawling and stone-throwing broke out.

"The number of the violent criminals was higher this year, the acts of violence began earlier and the attacks against police officers were more violent," Glietsch said.

Last year, 112 police were injured in May Day protests. 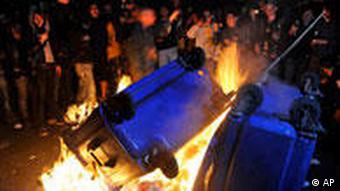 Police said officers carrying shields, clubs, tear gas and pepper spray confronted around 2,500 rioters on streets around Kreuzberg. Around 290 people were arrested amidst the violence, while warrants were issued for a further 44 people stemming from the unrest.

Protest organizers said at least 136 people were injured in the riots, 50 of which needed to be hospitalized.

"It's only a matter of time before someone gets killed in these riots," said Konrad Freiberg, leader of the GdP police union.

Rainer Wendt, head of another police union, criticized police tactics as too mild. He said police should make a more visible show of strength and use water cannons to repel violent rioters.

Several movements, ranging from anarchists to neo-Nazis, hold their main assemblies on May 1, Europe's Labor Day.

A look at May Day protests around Europe

Violence marred May Day protests in the German capital, but rallies elsewhere in Europe were largely peaceful. (03.05.2009)

Police clash with protestors during May Day demonstrations

Protestors and police clashed during May Day demonstrations in a number of European cities, with authorities in Berlin saying the city had experienced the worst violence in four years. (02.05.2009)