Berlin Man Wants End to Bendy Bananas | News and current affairs from Germany and around the world | DW | 18.10.2004

Fed up with the inconvenient curved shape of bananas, a Berlin resident has dreamt up a way to straighten this staple of the fruit bowl, even applying to have his banana-straightening method patented. 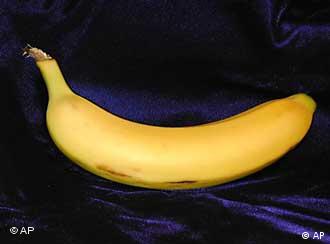 Could the banana's familiar curve soon be a thing of the past?

Karl-Friedrich Lentze thinks he's on to the biggest thing since sliced bread -- the straight banana. Or as he prefers to call it, the "cigar-banana."

The 56-year old social welfare recipient has developed a method to take away the yellow-skinned fruit's distinctive curve.

"Depending on the degree of the curve, chunks will be cut out of the banana, which will then be bound back together using biologically safe bandages," Lentze explained to the German tabloid Bild.

The curvy chunks won't go to waste. Lentze's plan involves either drying them or using them in fruit salad.

"After a certain introduction time, the straight cigar-banana will drive the curved banana from the market," Lentze said. "It's easier to eat, and easier to store."

Lentze is so convinced is of his idea's potential, that he's applied for a patent at the German Patent Office in Munich. His application is supported by sketches showing how bananas will be carried along on a conveyor belt while robots chop out the curvy bits.

If trends in Japan are anything to go by, Lentze's idea could well bear fruit. The Japanese can already buy square melons, which are grown in glass boxes. Grocers say the cubed fruit is much easier to stack.

What's the Stink About?

Switzerland's most famous export, the hole-ridden Emmental, is the focus of a European name-grabbing debate that could leave EU dairy farmers envying their US counterparts who simply call it Swiss cheese. (Sept. 26, 2004)

Music To Suit Your Taste

Carved out carrots, tuned up turnips and a rattle of radish are not exactly your typical orchestra instruments. But a group from Vienna is proving that veggies not only taste good, they sound good too. (May 25, 2004)

EU Want To Get the Facts (Not Carrots) Straight

Eurocrats in Brussels are fed up with the many myths peddled by the media about the European Union. A European Commission website sets out to put the record straight. (Feb. 19, 2004)