Air-cargo companies operating in Europe, particularly Germany, could face a new security surcharge to help cover the costs of additional security measures planned by the government. 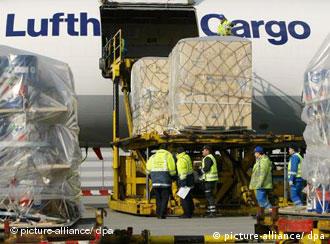 The German Transportation and Interior Ministries are currently discussing measures to increase air cargo security and ways to finance them.

"With all measures that could contribute to increasing air cargo security, of course the question of covering the costs, for instance through fees, needs to be examined," the Interior Ministry said in an e-mail.

Interior Minister Thomas de Maizière has been particularly keen to step up security in Germany's huge cargo sector ever since a parcel containing explosives passed through the Cologne-Bonn airport undetected in November. The package, which was eventually detected in Britain, had been dispatched from Yemen and was bound for the United States.

More than 2.6 millions tons of freight pass through Germany's five largest airports every year. Most of it is transported by passenger aircraft.

Numerous airlines, including Germany's Lufthansa, have introduced a security surcharge of their own to cover some of the cost of additional internal security measures for both passengers and freight.

"Our security costs have increased tenfold since 2001," Lufthansa Cargo spokesman Michael Göntgens told Deutsche Welle. "If the German government is considering a surcharge to cover costs for additional security measures, we all need to sit at the table to discuss the issue. Freight companies with their major hub in Germany, like us, need to be competitive."

Thomas Lieb, chief executive of Schenker Logistics, put it another way. "A surcharge will make cargo more expensive and hurt industry," he said in an interview with the German newspaper Welt, adding that Germany already had "very, very good security standards."

Unlike passenger airlines, freight companies are still not required to screen 100 percent of their airborne cargo. Significant changes in the way air freight is screened could have a major impact on the wider economy, as about one third of the world's trade by value is now transported by aircraft.

A spokesman at the Interior Ministry said that while Germany is examining how to increase air cargo security, including control measures of third states, the government has no plans "go it alone" and would push for a solution at the European level instead.

Germany is taking stock of its security policies for air freight after a package bomb bound for the United States passed through Germany before being discovered in England. (01.11.2010)

In a joint action with Britain, France, and the US, Germany has stopped all freight packages from Yemen. On Friday, authorities discovered explosives in two packages being sent from Yemen to synagogues in the US. (31.10.2010)

De Maiziere says that the packages containing explosives discovered over the weekend highlight security gaps. He wants to close them through the introduction of coordinated, pan-European measures. (02.11.2010)