Beethoven's 'Kreutzer Sonata' is one of the most famous chamber music works ever written. It inspired Leo Tolstoy to write a novella and Leos Janacek to his string quartet of the same name in 1923. 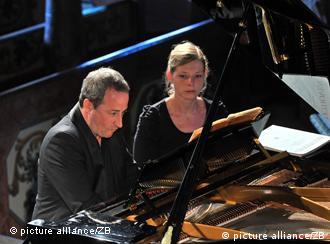 The Violin Sonata No. 9 packs an entire concerto into a duet, said Itamar Golan

When British violinist George Bridgetower and Beethoven got to know each other in 1803, the composer immediately set to work writing an extremely virtuosic violin sonata for his new friend. But before it went to print, the two firebrands found themselves in a bitter argument (supposedly involving a young woman) - and Beethoven instead dedicated the work at the last minute to French violinist Rodolphe Kreutzer. Kreutzer never played the sonata however, deriding it as incomprehensible and unplayable. Clearly, Beethoven had created a work that burst the bounds of the violin sonata form.

"This is just the character of the Kreutzer Sonata I love," explained Itamar Golan. "You've got two men on stage playing an entire concerto with the violin and piano. There's no orchestra. It's just unbelievable."

For both Itamar Golan and Julian Rachlin, the virtuosic, passionate parts aren't the most important in the piece, but rather the meditative second movement. "It exudes lightness and peace, but Beethoven spices it up with syncopation and trills," Golan added.