Listen in as the brass section shines in this excerpt from Richard Wagner's "Twilight of the Gods" that sweeps along the waters of the Rhine River. 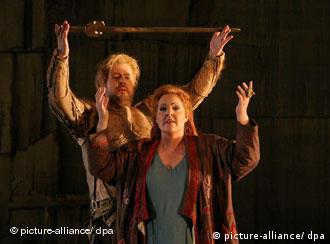 Richard Wagner
"Sunrise" and "Siegfried's Rhine Journey" from the opera "Twilight of the Gods"
Dohnanyi Orchestra Budafok
Conductor: Gabor Hollerung
MP3 recorded at the University of Bonn on October 3, 2011 by Deutsche Welle (DW)

Wagner appears alongside the likes of Liszt, Dohnanyi and Kodaly in a program of Hungarian music for a straightforward reason.

"When you go on tour for a concert, it's nice to pay tribute to the area where you play - we love it when a foreign orchestra comes to Hungary and plays something from our culture," said the Dohnanyi Orchestra Budafok's conductor, Gabor Hollerung.

"Sunrise" and "Siegfried's Rhine Journey" come from the fourth and final chapter of Wagner's opera cycle "The Ring of the Nibelung." In the scenes that accompany the music, the hero Siegfried bids farewell to his lover Brünnhilde and makes his way down from the mountain where they've lived together, arriving at and then journeying along the waters of the Rhine.

But invoking the legends of the river that flows a few feet away from Beethovenfest concert venues wasn't the only thing the conductor had in mind when he put Wagner on the program.

"I have to say that we have an incredible brass section, and of course that comes through beautifully with this piece," Hollerung said.

Richard Wagner: "Sunrise" and "Siegfried's Rhine Journey " from the opera "Twilight of the Gods"