Franz Liszt recreates the legend of Mazeppa in this symphonic poem as it brings the listener along for its hero's tormented journey through the wilderness and toward redemption. 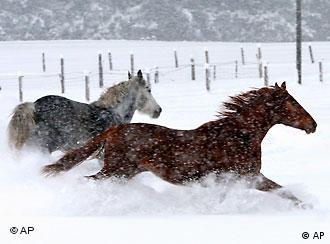 To celebrate German Unity Day on October 3 and Hungary's historic role in the process of German reunification, Budapest's Dohnanyi Orchestra Budafok delivered a performance full of energy and verve in Bonn.

You would be right on the mark if you think you can sense the sound of thundering hooves in "Mazeppa," the concert opener. That's what Franz Liszt had in mind in this symphonic poem. The composer himself invented the single-movement genre transposing the contents of a work of art or literature into music.

Liszt draws his inspiration from Victor Hugo's poem about a young page - Mazeppa - caught in bed with a powerful noble's wife. As punishment, Mazeppa is strapped naked to the back of his horse and sent off into the woods. On the verge of death, he lands in the Ukraine, where he meets, joins and ultimately goes on to lead the Cossacks.

"'Mazeppa is indeed about a Ukrainian freedom fighter, but if you listen carefully, you can hear a lot of Hungarian influence in the music, especially in this great triumphal march at the end," conductor Gabor Hollerung explained.

"Everything melts together wonderfully in Liszt - the German influence, the Hungarian influence, the eastern European tradition, even spiritual aspects - he really belongs to us all," Hollerung added.