The Roma and Sinti Philharmonic under Roma conductor Riccardo Sahiti bring the joys and struggles of the gypsy Carmen to life as her story builds to its tragic end. 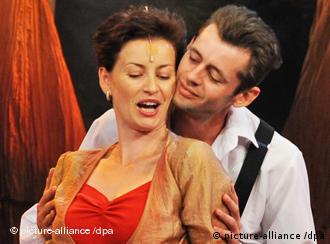 The figure of Carmen continues to fascinate

Roma conductor Riccardo M. Sahiti has one special goal: bringing his people's music and culture closer to other people. That means including works and artists in his repertoire that assimilated Roma and Sinti sounds, like Georges Bizet in his opera "Carmen." The work debuted in 1875, telling a story of love, jealousy and the death of the gypsy Carmen.

In 1967, Russian composer Rodion Shchedrin set out to arrange a Carmen suite in one act for a string orchestra and a large group of percussionists. The adaptation was intended for his wife, prima ballerina of Moscow's Bolschoi Theater. But the work drew heavy protests in the former Soviet Union. With the exception of Moscow, other Soviet cities were forbidden to perform Shchedrin's adaptation for years.

In this interpretation by the Roma and Sinti Philharmonic, the listener can experience Carmen's fate up close and personal in an hour of music. The strings alternate playing gently, boldly, sadly and wildly under Sahiti's direction, as he directs with open arms and a smile on his lips - perhaps thinking of Carmen herself. And with one final stab of the baton, he puts an end to Carmen's life both musically and visually. The performance earned long applause for the affable conductor and his Roma and Sinti Philharmonic in the Beethoven Hall.