Beethoven and more 2011 podcast #20: Looking back, looking ahead

Franz Liszt paid homage to gypsy music in his Hungarian Rhapsodies, infusing them with his own creative energy. It's an approach the Roma and Sinti Philharmonic shares, rendering classics with an eye to the future. 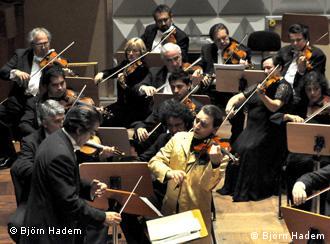 The Roma and Sinti Philharmonic

Like another work on the program - Kodaly's "Dances from Galanta" - Liszt's Hungarian Rhapsodies delve into the roots of folk music traditions in the composer's home country. But also like Kodaly's Dances, the whole is more than the sum of its parts. Rather than mimicking the gypsy music Liszt found in his journeys through Hungary, the composer lends his own musical brilliance and flair for showmanship to the indigenous themes he uncovered.

But the work remains a celebration of Roma heritage - a goal that the Roma and Sinti Philharmonic shares. That's one of two important aims of this group of musicians, said conductor and founder Riccardo Sahiti, who has appealed to contemporary composers to write works with the Philharmonic in mind.

"This orchestra was created for the sake of new works, so that tradition can go on. Hopefully in a century from now, we can say - now we have this symphony or that violin concerto because the Roma Philharmonic was there," Sahiti explained.

His pride in convening what he called the "first professional orchestra for Roma and Sahiti" was apparent throughout the evening as he beamed on stage - particularly during this piece, the program's show-stopping finale.