The symphonic works of Schumann look into the future. Conductor Paavo Järvi cites their 'inner power' and 'somewhat neurotic language.' 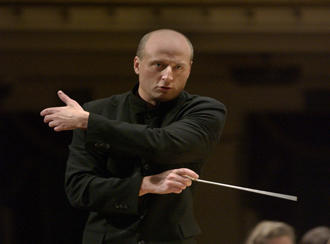 1841 is usually described as the symphonic year in Robert Schumann's life. Writing orchestral music came at urging of his wife, Clara, but the composer had also long wished to do so. In this, Schumann faced the same problem as every other composer of his time: how to write a symphonic work after Beethoven? But instead of looking back at Beethoven, Schumann's symphonies look forward, to the future of music. Conductor Paavo Järvi speaks of an edgy, "somewhat neurotic" tonal idiom that invokes new frontiers. Schumann thus fascinated many composers who came after, including Mahler.

After recording and performing worldwide the complete cycle of Beethoven's symphonies, conductor Järvi and his Chamber Philharmonic from Bremen took on Schumann's symphonic oeuvre, calling this the orchestra's "Schumann Project." Järvi believes that what Beethoven and Schumann have in common is the inner power of their music, saying that "in order to bring out Schumann's real personality, we must not only play what he wrote but also exaggerate the curious and sometimes illogical angles and little corners that make his music so wonderful and so incredibly unique." That is what Järvi and his Kammerphilharmonie do with their rendition of the Overture, Scherzo and Finale, one of Schumann's first approaches to the symphonic form, written in his symphonic year 1841.