Performing all ten of Beethoven's violin sonatas is a dream come true for Julian Rachlin and Itamar Golan. Their favorites include the early sonatas, which show 'something wonderful, something naive, something pure.' 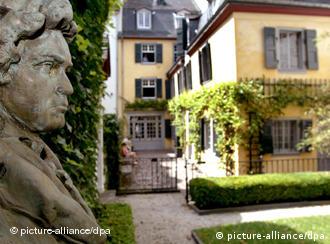 The concert venue is Beethoven's childhood home in Bonn

The duo of violinist Julian Rachlin and pianist Itamar Golan told DW, "Playing Beethoven in the house and city where he was born is a huge honor, very demanding and spectacular."

In early 1799, when Ludwig van Beethoven took his first stab at publishing works for violin with the three violin sonatas of opus 12, he dedicated them to the composer Antonio Salieri. New on the scene and unknown in Vienna, Beethoven was out to make a name for himself by getting in with Salieri. That most influential man in Vienna's music scene would have been able to open many doors for the young composer.

To Beethoven's contemporaries, these early works brimmed with new and unusual sounds. Critics at the time observed, "It's undeniable that Mister Beethoven is going his own way - but what a bizarre way it is indeed!"

For Julian Rachlin, it's no wonder that Beethoven's contemporaries could only shake their heads.

"Beethoven was a young and wild guy with revolutionary potential. It's the same as in the past century, when people got into a fuss about the new rhythms of rock and roll. The syncopations in this rondo set his contemporaries to stomping their feet."