Bearded Germans Triumph in Berlin | News and current affairs from Germany and around the world | DW | 02.10.2005

Proving they're not to be outdone when it comes to creative facial hair, Germans swept to victory in 14 of the 17 categories of the biannual world beard and moustache championships in Berlin. 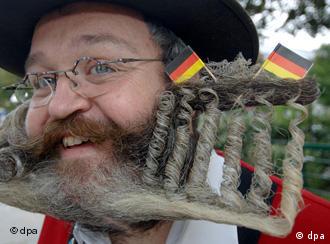 Beards and moustaches are doubtless forms of personal expression, but Elmar Weisser from Baden, winner in the "full beard freestyle" competition, went one further and made a patriotic statement. His beard was intricately styled into an convincing representation of Berlin's famous Brandenburg Gate, accessorized with tiny German flags.

Weisser was just one of 14 German contestants who prevailed in a total of 17 beard and moustache categories, which included musketeer, wild west, imperial Austrian, English and Dali. 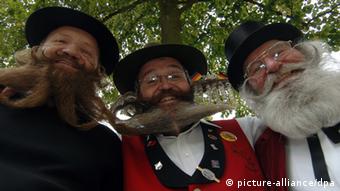 Some 220 contestants from all over the world gathered in Berlin for the biannual event -- men with Fu Manchu moustaches, flowing Santa Claus beards and gravity-defying sideburns.

Contestants were permitted to use hair gels, waxes and sprays to achieve their look, except in the natural moustache category, Jürgen Draheim, the deputy president of Berlin's beard club, said.

The dominance of the German contestants could be due to their home advantage -- this was the first time the championships have been held in Germany, which boasts 15 beard clubs.

The next world beard and moustache championships will take place in the British seaside city of Brighton in 2007.

GI Joe's buzz used to be troop standard, as officers meticulously monitored the length of soldiers' hair. Now even ponytails are allowed in the German army after a few shaggy men demanded equal treatment with the women. (June 18, 2005)

Illness left Thomas Chedor unable to compete anymore in javelin throwing, but the 36-year old German can now rejoice in being the new national champion when it comes to chucking mobile phones, Finnish style. (June 26, 2005)

Air guitar -- is it a cheesy farce or artistic pastime promoting world peace? The jury of public opinion is out on that one, but another jury will crown a world champion. We hear the lowdown from a German champion. (July 30, 2005)