Bayern Munich haven't just defended their first-leg lead on the road in Barcelona, they extended it by three goals. The Bavarians made the final at Wembley versus Borussia Dortmund, by the biggest semifinal margin ever. 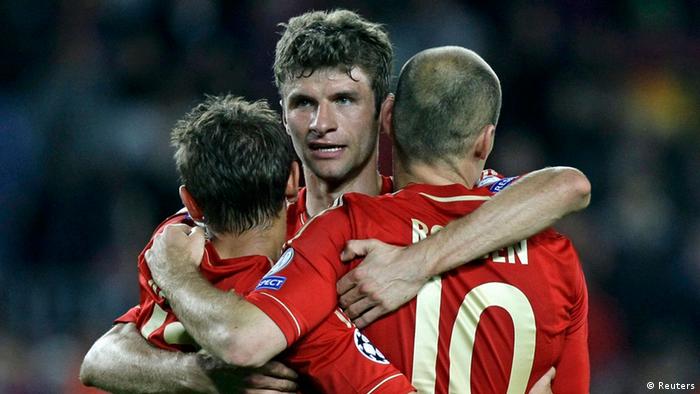 Bayern Munich won 3-0 on the night in Barcelona, stretching their aggregate winning margin to seven goals - a Champions League semifinal record. The Bavarians thus secure a place in the final on May 25 at Wembley, where they will face German rivals Borussia Dortmund. The two teams will even get to play a dry run of this fixture, albeit with considerably less at stake, in the Bundesliga on Saturday. 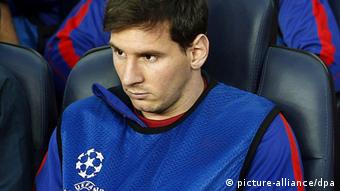 Lionel Messi had to watch the defeat from the sidelines

The pre-match choreographed fan display at the Camp Nou stadium spelled out "Barca pride" in giant letters in Catalan, precisely what the home supporters hoped their heroes could at least salvage. Their hopes weren't helped by confirmation that Lionel Messi, who looked a shadow of his usual self in the first leg, was not fit enough to start the match.

Yet Barcelona had the first major chance of a goalless first half, and also probably had the better of the game until the break. Bayern again focused almost all their attacks on the flanks and bypassed Barca's beloved center of the park, sometimes looking the more incisive.

Borussia Dortmund secured their place in the Champions League final on Tuesday night despite losing 2-0 to Real Madrid at the Bernabeu stadium. They successfully survived a last-minute scare courtesy of Sergio Ramos. (30.04.2013)

It's all over at the Camp Nou, and Bayern Munich have made the Champions League final with an imperious seven-goal winning margin on aggregate! Come and relive the match with us in - almost - real time. (01.05.2013)

Arjen Robben missed the opening period's only "sitter," when he was released down the right flank after some splendid one-touch passing. Clean through on Victor Valdes, the Netherlands international sought to place the ball into the bottom corner, only for the Spanish goalie to frustrate him.

A close range volley from Barca captain and Spanish star Xavi was the hosts' best first-half opportunity, but the midfield maestro put it just over Manuel Neuer's bar. The German goalie had several saves to make in the night, but only a long shot from Pedro caused him any serious problems.

As with the first leg, Bayern sought to pressure Barcelona in their own third of the pitch, but then permit them a little space in the middle of the park, instead closing off the danger zone. Coach Jupp Heynckes' gameplan again worked wonders, as the Spanish stars repeatedly failed to break through Bayern's last line of defense.

Three twists of the knife

Bayern flew out of the blocks in the second half, squandering an excellent breakaway seconds after the restart. 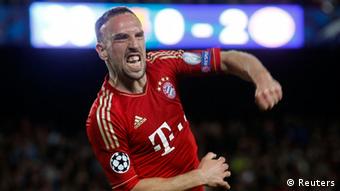 Ribery created two of Bayern's goals from the left

Moments later, left-back David Alaba floated the ball across the field masterfully, picking out Robben in acres of space. The Dutch winger cut inside, beat Barca's makeshift fullback Adriano, and then fired a trademark curler into the top corner with his left instep.

Suddenly, a dejected Barca needed six goals to win - against a team that has only conceded three in one match all season. Despite having a total of 15 shots, compared to Bayern's eight, most of Barca's efforts were speculative long-range hits that failed to trouble Neuer.

The first actually fell to Barcelona's defender Gerard Pique, who was obliged to do something with the ball as a Bayern attacker hovered on his shoulder. He miscued his volley straight past his keeper, putting the Bavarians two goals to the good. 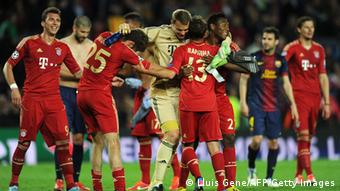 The Bundesliga champions are on course for a treble

Ribery's second ball in from the left was a floaty number to the back post, and first leg hero Thomas Müller rose highest to meet it, heading home from point-blank range.

Heynckes was even able to rest key players at risk of suspension in the second half, with the Barcelona mission more than accomplished. The coach, who had already rested the at-risk defender Dante, was able to bring off Bastian Schweinsteiger, Javi Martinez and captain Philipp Lahm – all of whom were playing on thin ice, knowing that a booking would mean suspension for the big game at Wembley.

The seven-goal winning margin over two legs was the largest in the history of the current iteration of the Champions League, although Eintracht Frankfurt won 12-4 on aggregate against Glasgow Rangers in the competition's now unrecognizable predecessor, the European Cup, in 1960.