Bavarians Stand Up for Low Necklines | Germany | News and in-depth reporting from Berlin and beyond | DW | 02.08.2005

Bavarians Stand Up for Low Necklines

The southern German state of Bavaria went into a state of uproar as rumors begin to circulate that European bureaucrats would ban low-neckline dresses in beer gardens to protect the waitresses from the sun. 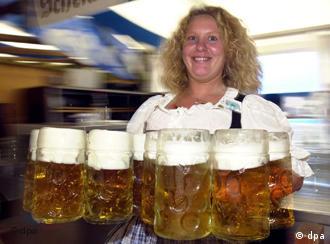 Keep your laws and regulations out of my dirndl!

The Bavarians can finally breathe a collective sigh of relief because now they know that nobody is going to mess with their beloved dirndl -- the traditional Bavarian dress that accentuates the upper part of the female body with a revealing neckline. Only yesterday, however, the dirndl as we know it, seemed to be on the brink of extinction, and proud Bavarians ready to declare a cultural war on Brussels. 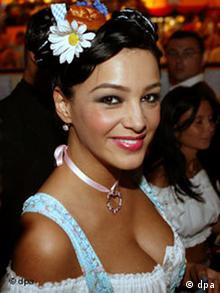 After the European Parliament passed a directive to protect employees from optical radiation, including sunlight, the Bavarians started worrying that petty bureaucrats from Brussels would start meddling into their private affairs, crippling the time-honored Bavarian sense for fun and seriously limiting the freedom of expression of those friendly and well-muscled beer garden waitresses.

A newspaper from Munich described the EU initiative as the outright "cleavage ban." The mayor of Munich, Christian Ude, warned of "European legal perfectionism" and threatened never to enter a beer garden again if he were not to be greeted by plunging necklines.

"The dirndl is an integral part of Bavarian culture and joy of living -- a culture that many are jealous of," said Frank-Ulrich John, the spokesperson for the Bavarian Association of Hotels and Inns.

"I have spoken with many servers, and I have never heard that a sunburn in the cleavage area has been a problem," John said.

Munich is no Brussels

According to John, EU citizens are more mature than EU bureaucrats think.

"I could imagine a buttoned-up waitress with a sunshade, but only in Brussels," John added. 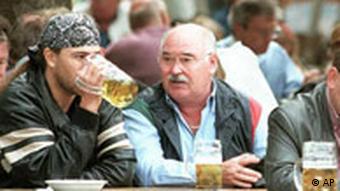 The beer garden is a Bavarian social institution of utmost importance

The EU representative in Bavaria, Paul-Joachim Kubosch, however, assured the beer garden fans that there was no need for the neckline scare, since the European directive on optical radiation would only concern high-risk professions, which does not include beer garden servers.

So it seems that the dirndl is safe, after all, and, along with it, the Bavarian sense of friendliness and cheerful openness to the world.

Which is probably a good enough reason to hit the first beer garden and celebrate.

Once a rural kingdom, Bavaria has turned into one of Germany's high-tech centers. But Germany's largest state is still trying to find the right balance between laptops and lederhosen. (Dec. 4, 2004)

Click here for a selection of best stories from DW-WORLD's "And Finally..."

In the Land of Beer

A rose is a rose is a rose -- but that doesn't hold true for beer. As a beer-drinker's paradise, the vast choice in Germany can be mind-boggling. Here's a brief guide. (July 31, 2005)