Bavarian Premier Stoiber Says He Will Step Down | Germany | News and in-depth reporting from Berlin and beyond | DW | 18.01.2007

Bavarian Premier Stoiber Says He Will Step Down

Following a major debate in his Christian Social Union party over his leadership, Bavarian Premier Edmund Stoiber has announced that he will step down in September. 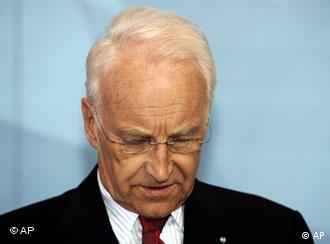 The embattled leader of Bavaria's ruling party, Stoiber said he would step down as chairman of the Christian Social Union (CSU) and premier of the German state on Sept. 30.

"I have decided that I will not stand in the regional elections next year" and therefore will make way for a new candidate to lead the party, he told journalists in Munich.

Stoiber, a strategic ally of Chancellor Angela Merkel, has faced strong pressure to resign since opinion polls showed last weekend that support for the party has plummeted.

"My aim is to ensure that Bavaria remains the most successful state in Germany," he said, explaining his decision.

Rifts with Berlin start the slide 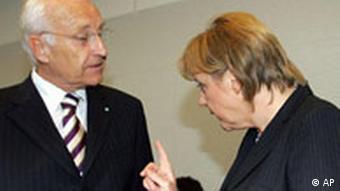 Stoiber has been a thorn in the side of Chancellor Angela Merkel and her Christian Democratic Union (CDU), sister party of the CSU, since abruptly dropping plans to join her cabinet soon after the 2005 general election.

He was proposed as the new economy minister but rejected the post just weeks before her coalition was formed.

The incident only strengthened the beliefs of many in Berlin that Stoiber was reluctant to leave the comfort of his home state for bigger challenges.

Adding further weight to that argument, he retreated to his Bavarian fiefdom but continued to haunt the conservatives from his southern base by criticizing the government and attempting to block Merkel's reform plans, most publicly the much-maligned health care reform, losing friends and allies as a result.

An attack dog in German politics, Stoiber often chipped away at

Berlin's authority over the country's 16 states. He also led the German center-right to overtly oppose Turkish entry into the "Christian" European Union.

Kurt Beck, the head of the Social Democratic Party, with which Merkel shares power, said having a lame duck premier in Bavaria would complicate national negotiations, though he said it would not affect cooperation within the ruling grand coalition. 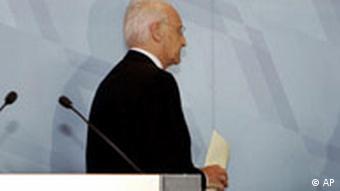 Will Stoiber turn his back on politics for good?

The slide in his popularity dropped into freefall after it was revealed last month that one of Stoiber's top aides pried into the private life of a rival.

Stoiber vehemently rejected the allegations made by party rival Gabriele Pauli that he knew about the efforts by his office to gather compromising information on Pauli's private life.

But despite the denials, Stoiber's reputation as a political troublemaker was only enhanced. The unrest the scandal caused almost certainly contributed to Stoiber's position becoming untenable.

Seen as one of the driving forces behind Stoiber's decision, Pauli tried to play down her role in the week-long power struggle within the CSU.

"I only said what many others in the party thought," she said. "Something can only get rolling when the stones are loose."

However, despite the growing unrest, Stoiber was considered a sure thing for another shot at re-election as recently as a month ago. 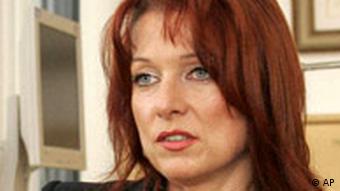 His decision to stand down before next year's state elections is being seen as a boost to the chancellor.

"This could be good for Merkel," Oskar Niedermayer, a political scientist at Berlin's Free University, told Reuters. "Just about any successor to Stoiber would improve the relationship between the CDU and the CSU in the government and in parliament."

According to sources within the CSU, Bavarian Interior Minister Günther Beckstein would replace Stoiber as premier of the rich southern state Stoiber has headed since 1993.

Both German Agriculture Minister Horst Seehofer and the Bavarian Economy Minister Erwin Huber have express interest in becoming become head of the CSU, of which Stoiber has been leader since 1999.

Seehofer, who this week was exposed to of had an extramarital affair, had previously said he would only consider taking the position if Stoiber willingly left the office. 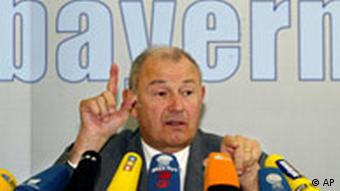 Günther Beckstein is being touted as the new premier

Stoiber's announcement signals the potential end of a political career which very nearly hit the heights.

He was denied becoming German chancellor in 2002 by just a few thousand votes, losing ground to eventual winner Gerhard Schröder on issues such as the flooding in eastern Germany and the Iraq war.

However, despite never having the top job, Stoiber has enjoyed great status.

As premier of Bavaria , he has not only ruled one of Germany's most prosperous regions but has also wielded unique power on the national stage, running a party that is outside Merkel's control, enjoying the use of royal palaces, dominating every aspect of administration and basking in the acclaim of the mainly Catholic population.

However, with his career seemingly reeling from one blow too many, Stoiber faces leaving the podium for the last time with the words of the Frankfurter Allgemeine Zeitung inscribed on his political tombstone: "Stoiber has shrunk from being a feared provincial ruler and politician of federal stature to a national joke: a toothless lion, a blunt guillotine."

The chair of long-time German powerbroker Edmund Stoiber is wobbling. Pressure is growing on the conservative Bavarian premier to step down and the repercussions could be felt in the German capital as well. (16.01.2007)

Edmund Stoiber, a powerful leader in Angela Merkel's conservative camp accepted his chief of staff's resignation Friday after charges the aide snooped on a critic's private life. Stoiber denies he knew of the snooping. (23.12.2006)

Stoiber Speaks Out Against SPD and Turkish EU Membership

At the Christian Social Union (CSU) party convention this weekend, party leader Edmund Stoiber unambiguously rejected EU membership for Turkey and sharply criticized the other half of the Grand Coalition. (16.10.2006)