Rescue workers have recovered over 800 bodies from the rubble of a collapsed garment factory and expect to find more. Meanwhile, Bangladeshi authorities have closed 18 factories deemed unsafe. 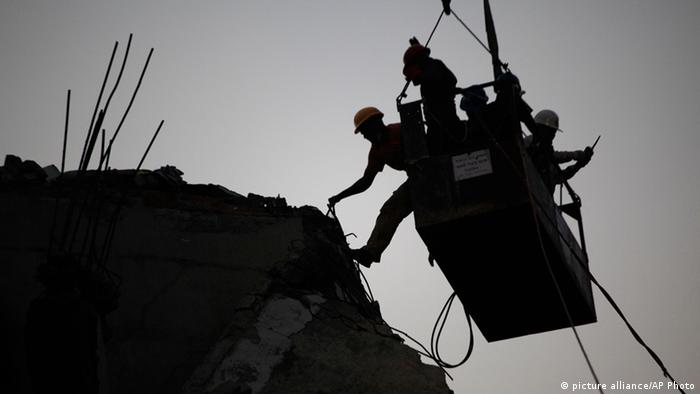 The discovery of more bodies trapped beneath the debris on Wednesday pushed the death toll of Bangladesh's worst industrial disaster to over 800. Rescue workers, who have been searching for the victims for two weeks, hoped to end their work soon, according to the supervisor on site.

"The rescue crew will hopefully be able to remove all rubble from the site in two to three days," Army Major General Hassan Suhrawardy told the news agency DPA.

Although it was unclear how many people had been in the Rana Plaza on April 24 at the time of the accident, authorities have estimated that the factories in the building employed some 3,000 workers. More than 2,400 have been rescued alive.

Authorities have been forced to rely on DNA samples as the only means to identify the remains of victims now rendered unrecognizable through decomposition.

Authorities crack down on negligence

Public outcry has put pressure on Bangladeshi authorities to investigate the safety regulations of their garment factories, which account for nearly 80 percent of the country's exports.

"We have shut 16 factories in Dhaka and two in Chittagong. If found risky, other factories will also face closure," Textile Minister Abdul Latif Siddiqui told reporters on Wednesday.

Meanwhile, victims of the factory collapse began receiving compensation for their injuries, according to the Bangladesh Garment Manufacturers and Exporters Association.

The Associated Press news agency reported that workers had demanded four months' salary, or a total of roughly $152 (115 euros).

The owner of the factory in Savar, which lies near the capital city Dhaka, reportedly ignored employees' concerns two weeks ago when they began noticing cracks in the structure. Following a brief evacuation, the workers were told to return inside the building. The eight-storey building housed five garment factories.

Authorities detained the factory owner and several others days after the accident.