The double-decker ferry packed with passengers capsized after being hit by a cargo vessel from the rear. Rescue workers were searching for survivors late into the night. 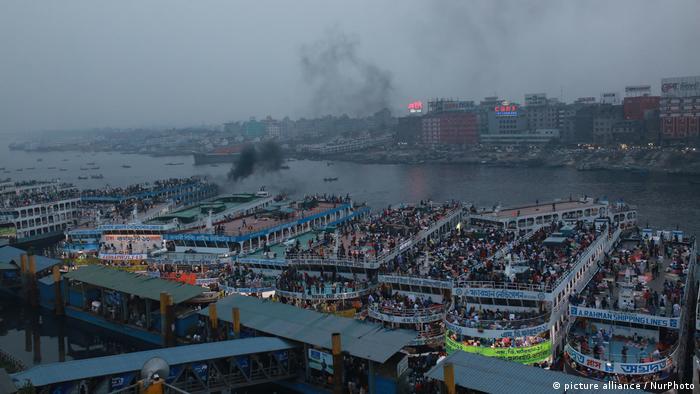 Thousands in Bangladesh were rushing home on ferries after the government announced a seven-day lockdown from April 5.

The small ferry packed was packed with more than 50 passengers when it collided with another boat in central Bangladesh on Sunday evening.

The double-decker ferry was hit by a cargo vessel from the rear and immediately sank in the Shitalakhsya River, near the capital Dhaka, said Mobarak Hossain, an official at the Bangladesh Inland Water Transport Authority.

The accident took place around 6 p.m. local time (1200 GMT/UTC), soon after the boat left the city of Narayanganj for the neighboring Munshiganj district on a 45-minute journey.

The ferry was packed with passengers rushing to leave the industrial district after the government confirmed a nationwide lockdown for seven days starting Monday in a bid to control the rising COVID-19 cases.

During the seven-day lockdown, all domestic travel services including flights would be suspended, and malls and shops shuttered.

Banks would be allowed to open for just 2.5 hours on weekdays, while public and private sector businesses were told to only have a skeleton crew in their offices.

Rescuers, including divers from the fire brigade, recovered five bodies during late-night searches.

By Monday afternoon, another 20 bodies were recovered.

The rescue operation was hampered by a powerful storm that hit after the accident.

Some 11 survivors were pulled from the water while other passengers may have swum to safety on the other side of the river, Abdullah al Arefin, Narayanganj's fire brigade chief told news agency AFP on Sunday.

Eight of the survivors were given first aid, while three others were hospitalized, the Daily Star newspaper reported.

Such accidents are not uncommon in Bangladesh where millions depend on the ferries for transport, particularly in the country's southern coastal region.

Experts blame poorly maintained vessels, overcrowding, lack of safety measures, and the lax implementation of regulations for many of these accidents.

Protests against a visit by Indian Prime Minister Narendra Modi to Bangladesh have killed at least five people. One group called for a nationwide strike to protest the deaths.

Should Pakistan apologize to Bangladesh for the 1971 war?