Bangladesh elite police forces have detained three suspected Islamists, who allegedly masterminded the killings of secular bloggers. The "main planner" of the murders is a British citizen, officials claim. 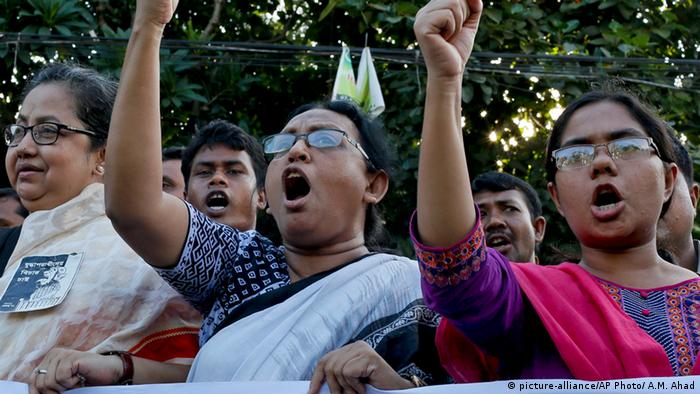 The special police unit detained three members of the group, including a 58-year old British citizen Touhidur Rahman, for their alleged involvement into killings of two online activists. The bloggers were hacked to death by machetes earlier this year.

"We can confirm that Rahman is a Bangladesh-origin British citizen. He is the main planner of the attacks on Avijit Roy and Ananta Bijoy Das," Alam told the AFP news agency.

"The other two Ansarullah members arrested today are Sadek Ali and Aminul Mollick. Ali has admitted in primary investigations that he took part in both the murders," Alam said.

Suspected Islamist gangs have killed several secular bloggers since the beginning of the year, including a Bangladeshi-born US citizen Roy in February and Das in May.

The authorities banned Ansarullah Bangla Team after the murder of Das.

In a similar incident, a group of machete-wielding assailants broke into an apartment of the blogger Niloy Neel in Dhaka and hacked him to death earlier this month. The police have since arrested two suspects, belonging to the same extremist organization.

Months before his death, Neel allegedly complained that he had been followed. However, police refused to register the complaint and instead told him to leave the country, according to his Facebook post.

The string of murders indicate the struggle between the government forces and the Islamists groups, who aim to turn the Asian country with a population of 160 million into a Sharia state.

Police in Bangladesh have arrested two suspected Muslim militants in connection with the killing of a secular blogger. Last week’s attack was the fourth murder of a blogger in six months. (14.08.2015)