Ayatollah Khamenei calls for calm but condemns those questioning vote | World | Breaking news and perspectives from around the globe | DW | 19.06.2009

Ayatollah Khamenei calls for calm but condemns those questioning vote

Iran's supreme leader Ayatollah Ali Khamenei called for calm and "peace of mind," but attacked "enemies" questioning the presidential vote that has sparked the biggest protests in the Islamic Republic's history. 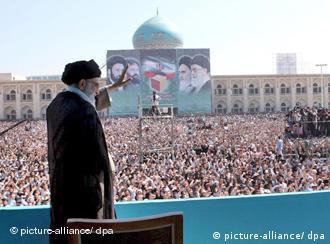 Khamenei spoke publicly for the first time since the election

"It is difficult to find the right path if you are agitated," Khamenei said at the beginning of his remarks, which traditionally focus on religious issues, without referring directly to the protests.

"Today the Iranian nation needs calm," Khamenei said in his first address to the nation since the upheaval began.

He said Iran's enemies were "targeting the Islamic establishment's legitimacy by questioning the election and its authenticity before and after (the vote),"

"The enemy wants to tell people you should not have trusted in the state," he said. Protesters would be "held responsible for chaos" if they didn't end massive demonstrations.

"The result of the election comes out of the ballot boxes, not on the street," he added, saying political leaders who engaged in extremist behavior were responsible for any post-election bloodshed.

"Straight protest is not acceptable. This is a challenge to democracy," Khamenei said.

Khameni rules out vote-rigging and cheating 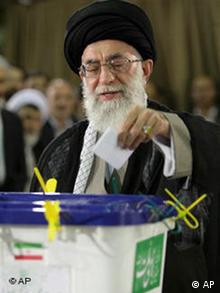 Khamenei added that the people had picked who they wanted as president in last week's disputed election and praised Iranians for taking part in the election, calling it a "a magnificent show of responsibility of the people to determine the fate of their own country." He said it showed the people's trust in the country's Islamic system.

Khameni said there was a "definitive victory" and no vote rigging, offering no concession to protesters demanding the vote be canceled and held again. Khamenei ruled out any cheating in the June 12 election, especially as there "was a difference of 11 million votes."

"How can 11 million votes be changed?" Khamenei asked. "Some supporters of candidates should know that the Islamic republic does not cheat," he added.

Khamenei confirmed President Mahmoud Ahmadinejad was re-elected with 24.5 million votes from the total of around 40 million votes cast.

All challenges should be through legal means, Khamenei said. Again indicating his opposition to protest measures, he stressed that he would not accept any "illegal initiatives."

People chanting slogans and holding posters of Khamenei, Ahmadinejad and Ayatollah Ruhollah Khomenei, the father of the 1979 Islamic revolution, packed streets outside the university. 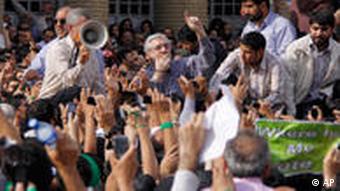 It was Khamenei's first public appearance since the controversial election was held on June 12.

Iran's supreme leader, who is widely seen as backing the re-election of Ahmadinejad, has a final say on all political decisions in the Islamic republic. He said he would consider a partial recount after Ahmadinejad's defeated challengers lodged formal complaints of vote-rigging.

No protest rallies were planned for Friday, but another mass protest was announced for Saturday.

Keeping up the pressure on the Islamic regime over the disputed vote, tens of thousands of supporters of Mousavi carried out a demonstration in Tehran on Thursday, the sixth straight day of protests that have rocked the capital.

Mousavi joined the crowds, most of whom were dressed in black as a mark of mourning for demonstrators killed in clashes during the protests, which have been banned by the authorities, witnesses said.

According to the opposition People's Mujahidin Organization of Iran, a group which was recently removed from a European Union terrorism blacklist, 43 people have been killed in the protests, 30 of them in Tehran. State radio has reported seven deaths since the protests started.

Protesters carried pictures of Mousavi and placards bearing slogans such as: "We have not had people killed to compromise and accept a doctored ballot box," one witness said.

Mousavi appeared despite warnings from the hard-line Basij militia – which has been at the forefront of action against protests – for defeated candidates to dissociate themselves from "rioters."

Meanwhile Iran's Guardian Council, which is in charge of approving the election process, invited Mousavi and two other presidential candidates, Mehdi Karroubi and Mohsen Rezai, to participate in a review of the election results on Saturday.

The candidates claimed 646 irregularities in the June 12 polls, where Ahmadinejad won a landslide 63 percent victory, according to official results.

The European Union has released a statement expressing serious concern after the deaths of Iranian protesters and called on Iranian authorities to allow peaceful demonstrations. (16.06.2009)