Big wins by Austria's far-right parties in recent federal elections have been called "deeply disturbing" and a "rejection of European values." 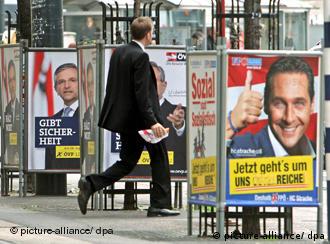 Slovenia's government has expressed concern over what is seen as its neighbor's embrace of far-right parties.

"The result of elections in Austria is surprising and worthy of concern to some extent, particularly in those cases that represent a rejection of European values," Slovenia's foreign ministry said in a statement.

The vote was a major win for Austria's two far-right parties which campaigned on an anti-immigration platform. Both the Freedom Party and Alliance for the Future of Austria have promised to defend the rights of "true Austrians."

The British press also expressed its dismay over the turn of events.

The populist Daily Mail described the far-right gains as "deeply disturbing," saying it offered an "unsettling reminder of Austria's Nazi past."

But the Daily Mail as well as right-leaning Daily Telegraph viewed the results as an example of a broken political system, not a return to fascism.

"Voters like a choice between sensible parties," the Daily Telegraph wrote. "When they don't get it, they will vote for silly ones."

The Social Democrats and the conservative People's Party saw their support eroded, although they would still have enough votes to form a coalition. Yet it was the main parties' failed left-right coalition that doomed the current government.

The Social Democrats remain the strongest party despite heavy losses. Party head Werner Faymann said he would seek to form a coalition with the People's Party even though differences between the two centrist parties had triggered early elections.

Joerg Haider, the leader of the right-wing Alliance for the Future of Austria, has said he would be prepared to join a new government with the conservatives.

Austrians will likely go to the polls in September after a leadership crisis brought an end to a partnership between Social Democrats and the conservative People's Party. (07.07.2008)