A fundraising site has barred controversial rugby player Israel Folau from using its platform to raise legal fees. GoFundMe said the Australian's homophobic comments went against its policy of "inclusivity." 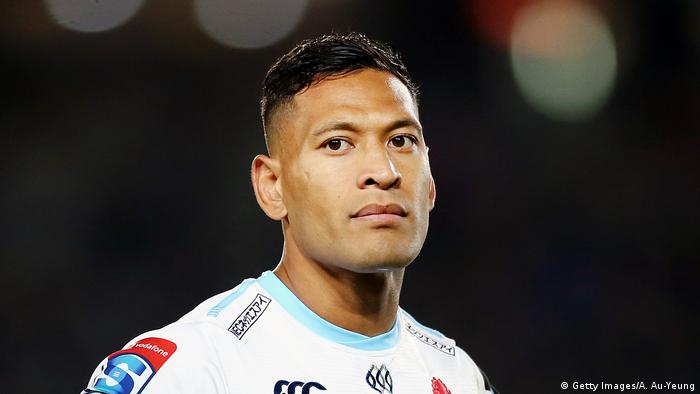 The 30-year-old athlete was seeking to raise AU$3 million ($2.08 million; €1.83 million) to appeal against Rugby Australia's decision to fire him for making homophobic comments on social media.

"After a routine period of evaluation, we have concluded that this campaign violates our terms of service," GoFundMe's regional manager in Australia, Nicola Britton, said in a statement.

"As a company, we are absolutely committed to the fight for equality for LGBTIQ+ people and fostering an environment of inclusivity."

Folau's campaign had raised more than AU$750,000 before it was removed from the site. GoFundMe said that money will be refunded to donors.

Folau's fundraising efforts have been widely condemned, with many critics pointing out that the Wallabies fullback was one of the best-paid players in the world.

Rugby Australia terminated Folau's AU$4 million, four-year contract in May after finding that he had breached the code of conduct in a homophobic online post in which he said "hell awaits" gay people.

Folau, a fundamentalist Christian, has lodged his case with Australia's employment watchdog, the Fair Work Commission, arguing that he had simply posted a message from the Bible.

The rugby star's wife, New Zealand international netball player Maria Folau, was also heavily criticized after promoting her husband's GoFundMe campaign on social media. Australia's most capped netball player Liz Ellis called for her to be sanctioned over the post.

"There is no room for homophobia in our game," she tweeted late on Sunday. "Anyone who is seen to support or endorse homophobia is not welcome.

"As much as I love watching @MariaFolau play netball I do not want my sport endorsing the views of her husband."

Results of a two-month nationwide survey show a majority of the public supports lifting a ban on same-sex marriage. The result is set to intensify a divisive debate about how to enshrine marriage equality into law. (15.11.2017)