Thousands of items from Germany's house of Hanover are going under the hammer this month. The former royals hope to raise at least 12 million euros ($14.5 million), but not all family members are happy with the decision. 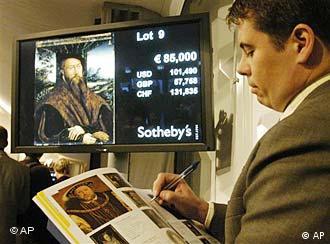 One down, thousands to go

The house of Hanover -- also known as the Welfen -- is one grandest and oldest royal families of Europe. It has spawned many English Kings and is famous for having built most of its wealth through marriage rather than through war. 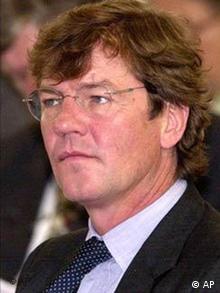 But the family's peaceful image hasn't fared quite so well in recent years. The controversial head of the family, Prince Ernst August, has gained notoriety for his fist fights with the paparazzi and frequent court appearances.

Now the Prince, who is the third husband of Princess Caroline of Monacco, has allowed his two sons to sell most of the family's art collection so they can set up a fund to maintain the 130-room family castle -- Marienburg.

Hundreds of potential buyers, collectors and aristocrats have made the trip to the Welfen headquarters for the auction, which runs until Oct.15.

The Prince's cultural advisor, Christoph von Douglas, said the opening days of the auction have been a great success. 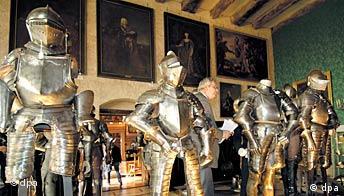 Suits of armor up for sale at Marienburg castle

"The money brought in by the auction so far is almost three times our conservative estimate, and double what we'd hoped," he said. "We never thought we'd do this well, especially with some of these more 'difficult' portraits and these antique weapons, which can be difficult to sell these days. The result is just great."

Twenty thousand items -- from oil paintings to armor-- are destined to go home with the highest bidders in what experts say could be the last royal auction Europe will ever see.

With up to 40 items changing hands each hour, Sotheby's auctioneer Patrick von Mares said he has his work cut out for him.

"We've received bids from all around the world," he said. "I saw that every telephone operator was actively bidding -- it was quite a spectacle. It was great to see how someone would bid 15,000 and the next would hit straight back with 18,000, then 20,000. It was a wonderful atmosphere." 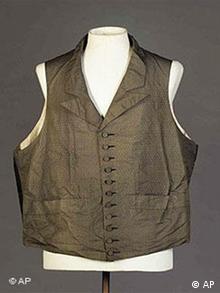 This vest of former English King George IV may have attracted royal bidders.

But the auction has attracted a number of curious onlookers, too. Some of them, like Dirk Stefanski, couldn't resist getting involved in the bidding.

"This is the only item that went for a bargain today," he said. "I didn't really want to buy anything -- I just wanted to come and have a look, but then I saw this -- a 500-year-old dagger going for less than the list price. I think I'll just put it on my desk and open letters with it -- why not?"

But not everyone is happy with the auction. The Prince's own brother, Heinrich von Hannover, has been a vocal critic of Ernst August's decision to sell off the family silver.

"He needs to understand that he's lost his standing in the family because he's selling off our cultural heritage -- or at least part of it," Heinrich said. "What I'm criticizing is that my family has in fact lost power through this. I wouldn't say it's caused a rift within the family, but the whole thing certainly is regrettable." 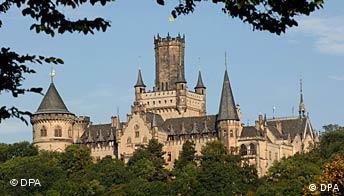 Marienburg castle will be opened to visitors.

But Prince Ernst August stands by his decision. He said his two sons will retain a few pieces of art from the family collection and open the castle to the paying public.

The modest Bavarian home that was the birthplace of Pope Benedict XVI is up for grabs, but you'd have to be seriously wealthy to buy it. Bidders include an oil sheikh, and the price has skyrocketed into the millions. (July 16, 2005)

Hanover is known in Germany as the trade fair capital, a reputation which is continues to spread globally. But Hanover has more to offer than just the opportunity to view the latest gadgets at CeBit. (March 30, 2005)