Athlete with Down syndrome completes Ironman

Chris Nikic has become the world's first athlete with Down Syndrome to complete the Ironman triathlon. The 21-year-old Florida man now plans to set his sights on competing at the Special Olympics. 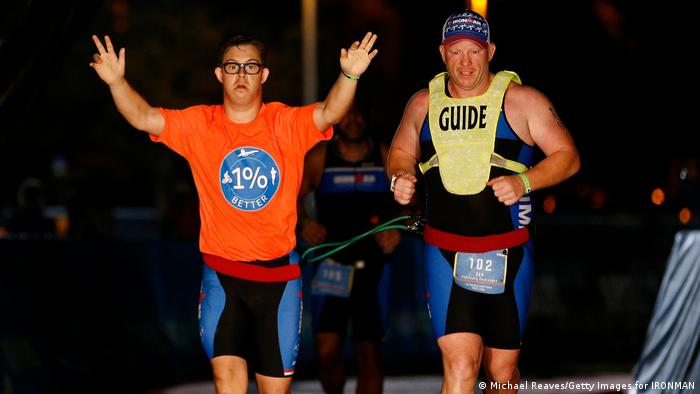 Chris Nikic fulfilled his dream on Saturday night, crossing the finish line of the Ironman triathlon in Panama City beach in Florida with both arms raised in victory – in a time of 6:18:48 hours. This made him the first athlete with Down Syndrome to complete an Ironman triathlon by swimming 3.86 kilometers (2.4 miles) cycling 180.2 kilometers and running for 42.2 kilometers – a feat no previous athlete with the genetic condition had ever attempted, let alone completed.

As he crossed the finish line on the running stage, Nikic was connected to his coach and guide, Daniel Grieb, by a belt – as he had been during the swim. After crossing the finish line together, the two men embraced in celebration.

The organizers described Chris Nikic's feat as "a defining moment in Ironman history."

'No dream too big'

"For Chris, the race was more than just the finish line and victory celebrations," said his father Nik Nikic afterwards. "It was also an example for other children and families who face similar obstacles, to prove that no dream is too big or no goal too high." 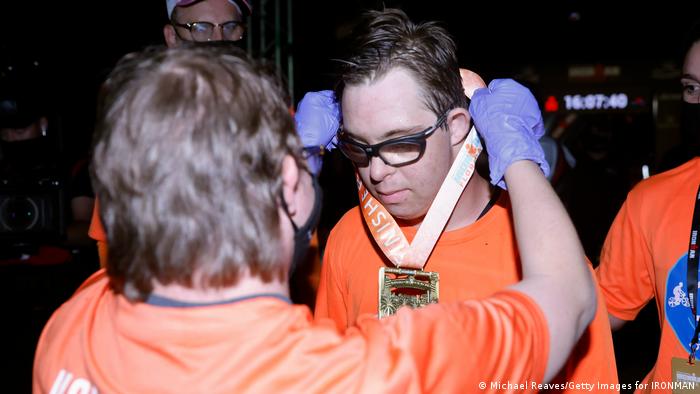 This credo applies not only to how Chris Nikic trains and competes, but to his entire life. It wasn't until the age of four could that Nikic was able to walk unassisted. His muscle strength and tension were far weaker than in a child without Down Syndrome.

On Sunday, Nikic, whose motto is "get 1% better every day," was unstoppable, even getting back up on the bike following a crash that left him with a bleeding knee, to compete the race. He was helped by enthusiastic support from spectators along the course of the cycling and marathon stage – as well as constant encouragement from Grieb, who although they were untethered, rode alongside him on the cycling stage.

Having completed his first Ironman, which also earned him an entry in the Guiness Book of World Records, Nikic now plans to set his sights on competing in the next Special Olympics, which are to be held in Orlando, Florida in 2022.