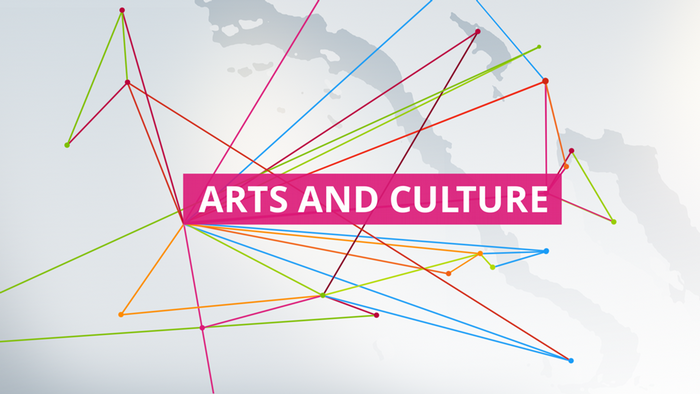 Let’s dive into the art world! Culture, in all of its facets: that’s what the “Arts and Culture” format is all about. The spectrum of the 13-minute show ranges from film and literature, to music and pop culture, to design and architecture. Its focus is on exciting cultural events in Germany, Europe, and around the world.

“Arts and Culture” reports on the most important film festivals, world-class exhibitions in major European cities, new World Heritage sites, and international authors who spark discussion in their home countries. We also regularly address socio-political debates: the discussion about the West’s colonial past as reflected in its museums; new phenomena of digital culture; or the influence of women artists and musicians on male-dominated fields.

In addition, we offer literary and culinary tips: in the series “100 German Must-Reads,” David Levitz presents a selection of German-language books in English translation, from 1900 to the present day. And the “Baking Bread” series sends Europe correspondent Georg Matthes to the kitchen, where he bakes 28 bread specialties from the (still) 28 member states of the European Union, seasoning his recipes with anecdotes from the countries of origin.

“Arts and Culture” is presented by Robin Merrill, from Britain, and Karin Helmstaedt, from Canada.