Artificial blood made from human stem cells could plug the donations hole | Science| In-depth reporting on science and technology | DW | 03.06.2014

Donating blood is a part of life for many people. But donation services around the world struggle to meet the demand for blood in hospitals and surgeries. Artificial blood may be the solution. 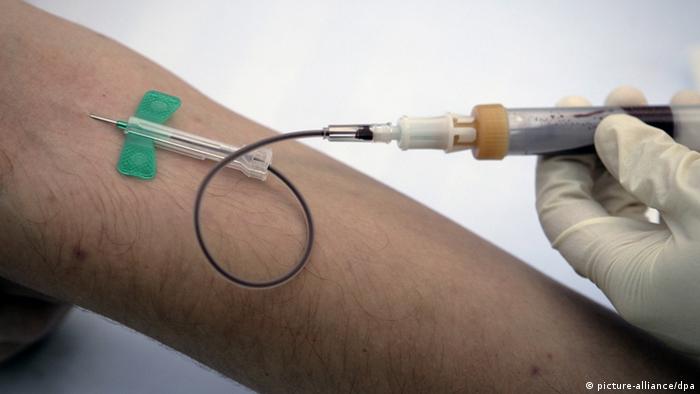 "It's a tiny wee finger prick test," says senior nurse Patsy Scouse to calm the nervous first-time donor having his hemoglobin levels tested at a blood donation centre in Edinburgh.

The Scottish National Blood Transfusion Service receives donations from about four percent of the UK's population. Currently, stocks are stable, although the service is always trying to recruit new donors.

The collection may take place in a clinical environment, the nurse says, but the clinic "wants this experience, especially for first-time donors, to be really positive so they can go out and feel they've done a really good thing."

But the service is also working on potential new technologies to secure blood supplies in the future, including "artificial blood."

Mark Turner, medical director of the Blood Transfusion Service, is looking into how blood could be synthesized in the future.

"We've known for some time that it's possible to produce red blood cells from so called adult stem cells, but you can't produce large amounts of blood in that way because of the restrictive capacity of those cells to proliferate," he explains. What scientists can do, he adds, is to derive pluripotent stem cells - stem cell lines - either from embryos or from adult tissue.

These cells are processed in the laboratory to produce larger numbers of cells, Turner told DW.

"It may be possible in due course to manufacture blood on a very large scale, but we're a very long way from that at the present time," he says. "At the moment, our focus is on trying to achieve production of red blood cells which are of the right kind of quality and safety, that they would be fit for human trials."

From the lab to clinical trials

Turner says we are still decades away from being able to industrially produce blood on a scale which is both cheap and safe.

"The differentiation process is very complex, you have to recapitulate to a certain extent the entire development that those cells go through from the very early embryo down to you or I," Turner points out. Five or six different culture environments have to be applied sequentially, and then it takes about 30 days to produce red blood cells, he says. 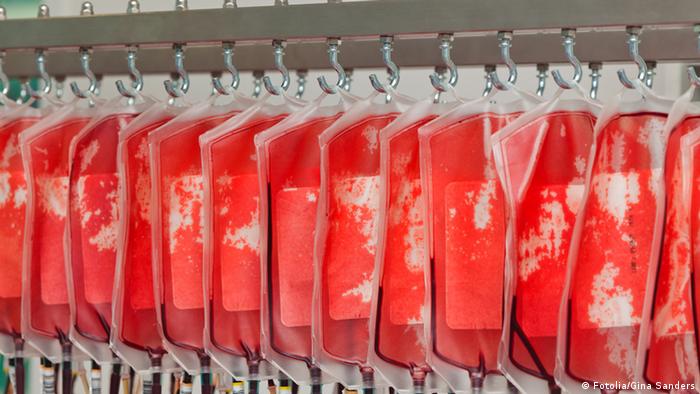 "The task we face now is to take that laboratory-based process to a manufacturing environment where the nature of the control, the quality control and the regulatory compliance are an order of magnitude greater.

The process needs to be more tightly controlled, he says, but so does the cost of production.

"There's no point in producing a million blood cells for a million pounds - nobody is going to use it!"

Most developed economies have sufficient blood supplies for the population's needs, but very many people around the world do not have access to sufficient, safe blood supplies.

About 50 percent of the blood available worldwide is used by the 15 percent of the population privileged enough to live in very advanced economies, Turner says.

"An estimated 150,000 women each year still die of postpartum hemorrhage - that is hemorrhage after birth - and many could be saved in those countries if there were adequate blood supplies."

An additional bonus: the stem cells being used in the research appear to be unproblematic ethically.

"One source of stem cells has traditionally been embryos, but some people are against the use of embryos in research," says Professor John Harris of Bioethics at the University of Manchester. He adds people needn't worry about this technology because the cells are not sourced from embryos, they're sourced from the skin cells of adults.

The professor explains that the cells are reprogrammed to a pluripotent state, which is the state before the cells specialize.

At a certain stage, they start to specialize and become part of the body, he says.

"This so-called artificial blood is not artificial, of course, because it is blood manufactured from human cells."

And assuming it is safe Professor Haris sees no problem with the method. Mass-manufactured blood could be used worldwide to treat even those people who may have ethical or religious concerns about traditional stem cell research.

German researchers have developed a synthetic material that allows stem cells to multiply. The porous structure could one day help to treat leukemia. DW looks at how the scientists created the material. (10.01.2014)

Scientists in the United States have recovered human stem cells from cloned human embryos, in what is a world first. They have described it as a "significant step forward" in medicine. (15.05.2013)