A rocket carrying an observation satellite into space developed an "anomaly" and failed minutes after takeoff from South America. The European launch company Arianespace apologized for losing the payload. 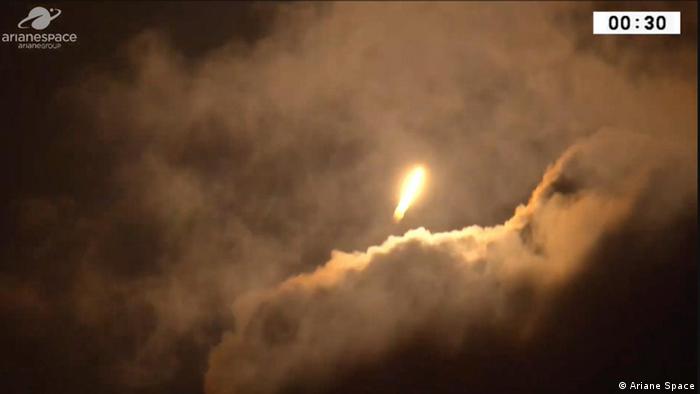 The rocket suffered an "anomaly" two minutes after takeoff, causing its trajectory to degrade and leading to "the premature end of the mission," Arianespace said. It was carrying an observation satellite dubbed FalconEye1 and developed by Airbus and Thales Alenia Space on the orders of the United Arab Emirates (UAE). The satellite was capable of capturing high-definition images that could be used for mapping and gathering agricultural information, as well as urban surveillance and monitoring of borders and coastlines.

"On behalf of Arianespace, I wish to express our deepest apologies to our customers for the loss of their cargo," company representative Luce Fabreguettes said.

The cause of the incident was not immediately known. The launch from the South American cosmodrome, operated by the European Space Agency (ESA), had been postponed twice due to high winds.

Arianespace belongs to ArianeGroup, which is a joint enterprise by Airbus and the French engine manufacturer Safran. The 30-meter (98.4 foot) Vega rocket is the smallest in Arianespace's lineup, which also includes Russian-made Soyuz rockets.

The first Vega rocket was successfully launched in February 2012, and Arianespace has since used it 14 times to carry cargo into orbit. Arianespace was set to launch another observation satellite, FalconEye2, before the end of the year.