Are Westerwelle and Guttenberg headed for a duel? | Germany| News and in-depth reporting from Berlin and beyond | DW | 25.11.2009

Are Westerwelle and Guttenberg headed for a duel? 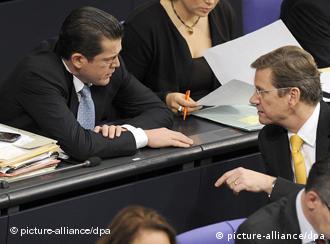 In the final twitchings of the grand coalition in the last legislative period, two center-right politicians came of age who represented everything that the alliance of crusty Christian Democrats (CDU) and Social Democrats (SPD) were not. They were young, popular reformers, free from the loyalty that Germany's political class feels towards the industry-based welfare state. The men, one a gay lawyer, the other a Roman Catholic aristocrat, emerged from the CDU's two allied parties - the pro-business Free Democrat Party (FDP) and the CDU's Bavarian sister the Christian Social Union (CSU).

In the past four years of mainstream stagnation, these two parties had successfully positioned themselves to the right of the CDU. The FDP siphoned off millions of voters disgruntled with the CDU's safe, centrist course. The CSU, meanwhile, portrayed itself as the right-wing social conscience of the CDU - the guardians of Germany's Christian tradition - criticizing any concessions that Merkel made to the SPD's more progressive wing. 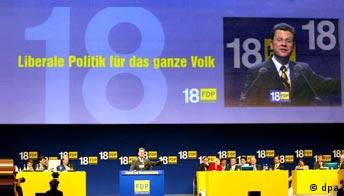 For different reasons, FDP leader Guido Westerwelle and Karl-Theodor zu Guttenberg found their moment in winter 2008 - 9. In those months, both men struck a note of independence that appealed to a population bored with politics and scared of the financial crisis. For Westerwelle, it was the final maturing of a long-frustrated political strategy, for Guttenberg, it was a sudden thrust into national prominence in serendipitous circumstances.

Guttenberg was promoted from the obscurity of Bavarian CSU politics on February 10 this year to take over the federal Economy Ministry. The incumbent Michael Glos had resigned complaining bitterly that Chancellor Merkel was ignoring him. Guttenberg's luck was two-fold: firstly, since the Economy Ministry belonged to the CSU, his competition for the post was limited. Secondly, the government badly needed a new economic strategy in the face of the financial crisis - it was a department where a man could make a name for himself.

Guttenberg quickly showed Merkel that there was no ignoring him. With his media-savvy charisma and his youth - at 37, he was the youngest ever Economy Minister - he quickly became the figure that Germans hung the growing economic confidence of 2009 on, and was soon heading Germany's popularity polls.

By a weird confluence, on February 11, the day before Guttenberg's first day in the cabinet, opinions polls reported that the FDP had reached the legendary figure of 18 percent for the first time. The number was heavy with ironic meaning, but it meant that Westerwelle's FDP had arrived.

In 2001, the FDP had set itself this ambitious target in its Project 18 election campaign. When the 2001 election came, the number became something of an albatross for the FDP after the party reached only 7.4 percent. Westerwelle may have regretted having the bright yellow 18 stencilled on the soles of his shoes for a TV appearance. 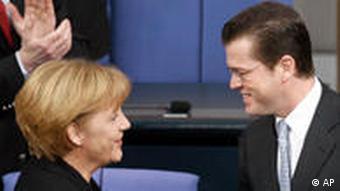 Merkel knows a potential rival when she sees one

In 2009, though, Westerwelle could say that his political strategy had been justified. In the 2001 campaign, as the party's brand new leader, he had been written off as the Spasspolitiker - the 'politician of fun'. By 2009 he had sobered his image significantly, but equally, it could be said that the financially frugal Germans had caught up with his liberal, low-taxation, free-market vision of Germany.

Despite the short-lived wave of discontent that followed the financial crisis and led to calls for more market regulation, it was the FDP that people increasingly identified as the party of economic competence during the recession. And though Germany's natural conservatism had re-aligned allegiances by September's election, when the FDP reached 14.6 percent, no-one could deny that Westerwelle had expanded the FDP's traditional base - it was now no longer only the party of young rich professionals. He had become a mainstream politician with massive appeal.

If February was the month that both men came of age, then October was the month both Westerwelle and Guttenberg had to adjust their ambitions. Merkel, who had led the CDU to victory despite its worst result since 1949, was aware that she was in the debt of both men. But as the complicated coalition and then cabinet negotiations unfolded, she was canny enough to deal with the two men as potential future rivals.

That Guttenberg had to be promoted was beyond question, but Merkel was not prepared to offer him the powerful position of finance minister he coveted - the natural progression from economics minister. Instead he had to make do with the defense brief, of which he was also the youngest ever holder.

Equally, Westerwelle found himself compromising core FDP demands in the tortuous coalition negotiations, and reneging promises. He had to accept smaller tax cuts than he had wanted, and had to agree to even greater debt to pay for them, even though this had been expressly criticized by the FDP earlier in the year.

The old charge of lack of political substance dogged Westerwelle when it came to his own position, too. It soon became clear that he was only too eager to align himself with political tradition and take on the role of Foreign Minister, even though his bold vision had been focussed on internal reform. The brave new FDP's defining campaign issues - tax reform, healthcare reform and unemployment benefit reform - were all domestic. 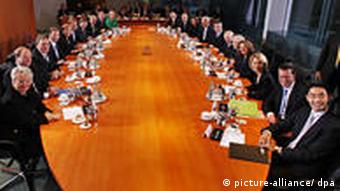 The new rivalries in the German cabinet are just emerging

Now thrust into the world of international politics, Westerwelle lacks a vision, an issue upon which he can impose a personal stamp. On top of this, his weakness with the English language has become an early source of ridicule.

But speaking English is the least of Westerwelle's troubles. His new job puts him into direct competition with Guttenberg, who, when he took up his new role, made the point that defense politics was also partly foreign politics.

Media reports are now building the contrast between the two into a rivalry. Earlier this week, Die Welt newspaper talked of a "race of foreign visits" between the two men, while state broadcaster ARD commented that "Guttenberg is being seen as second foreign minister". The news magazine Der Spiegel ran a long article comparing the two, entitled "Westerwelle vs. Guttenberg: The long-distance duel of the high-flyers".

There is certainly a contrast between their visions. The FDP's foreign policy is currently still a slightly undefined 'soft' policy - focussing on foreign development through their Economic Cooperation and Development minister Dirk Niebel. Guttenberg's focus is harder - having broken the taboo on calling Germany's Afghanistan mission a 'war', he places much more emphasis on offensive security.

Roger Boyes, long-time correspondent in Germany for the London Times, believes that this is the main conflict in German foreign policy, rather than the personalities of the two men. The defining point is "how Germany wants to project its power abroad," he told Deutsche Welle.

But Boyes does acknowledge that there is a tacit competition between the men, and that both have advantages over the other: "Guido is slightly ahead at the moment, and is using time quite constructively in setting up a Free Democrat foreign policy. Karl-Theodor on the other hand will probably end up being the better Atlanticist."

Many German newspapers have noted Guttenberg's fluent English, and he spent much of his early political career, when he was a regular member of parliament, as director of the CSU's foreign and security policy committee. The work often took him to the USA, where he made plenty of political contacts. But Boyes says that his cabinet post has inherent weaknesses.

"People like him because he has an air of slight independence, an aristo thing, but that will go if he is seen to be a US satrap in an unpopular war. Guido on the other hand has a traditionally popular job and just has to use his chances well," Boyes told DW.

For now, Germany's center-right can rejoice that it has these two popular over-achievers supporting their chancellor. But Merkel remains the final arbiter of Germany's foreign policy, and, as she perhaps privately calculated, she has set the two men up for a duel.

In a shift, German Foreign Minister Guido Westerwelle and Defense Minister Karl-Theodor zu Guttenberg have been speaking frankly about devising a plan to get German troops out of Afganistan. (16.11.2009)

Defense Minister Karl-Theodor zu Guttenberg said that his country was committed to its mission in Afghanistan, but that President Karzai's new administration must outline a clear plan for the future. (12.11.2009)