A Dusseldorf court has ruled that Samsung must halt sales and marketing of its tablet PC. The case is part of Apple's worldwide legal effort to come down against its main tablet rival. 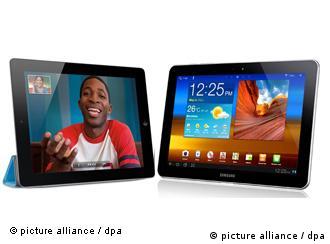 A German regional court in Dusseldorf granted Apple preliminary injunction across the European Union against Samsung, for infringing upon its "community design" of the iPad.

Samsung makes a tablet PC similar to Apple's iPad, known as the Galaxy Tab. The latest iteration of that product, the Galaxy Tab 10.1, was first released in June 2011 and has been released in many European countries in more recent weeks. Apple has said that this new version is remarkably similar to its iPad 2.

Apple has been pursuing intellectual property infringement lawsuits in the United States, Australia and the European Union, but this new ruling marks the first time that such a wide injunction has been granted. Samsung has indefinitely delayed the Australian launch of the Galaxy Tab as a result of pending litigation. 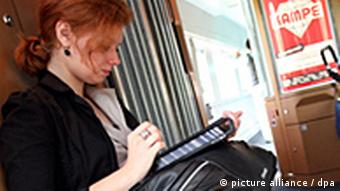 Apple has become the world's most valuable company

Samsung also counter-sued Apple in various countries, including its home country of South Korea, Germany, Japan, the United States, and has filed a complaint with the International Trade Commission.

On Tuesday, Apple also reached the status of world's most valuable company by market capitalization, overtaking Exxon Mobil at a value of $337 billion (234 billion euros).

It is not clear what will happen immediately to the Galaxy Tabs currently being held in European shops and warehouses.

However, the British newspaper The Guardian reported that European customs officers have been ordered to seize shipments of the Tabs, and that "tens of thousands" of the tablet PCs are "thought to have been seized" following the ruling.

In the EU, a community design is defined as "the appearance of the whole or a part of a product resulting from the features of, in particular, the lines, contours, colors, shape, texture and/or materials of the product itself and/or its ornamentation."

The Tuesday ruling, which Samsung said it will appeal, forbids the sale and marketing of the Galaxy Tab across the EU, with the exception of the Netherlands. Apple has filed a separate case in that country, and a court ruling was held in The Hague on Wednesday. 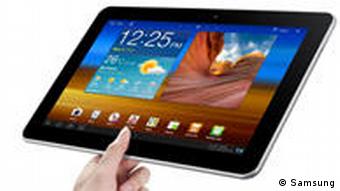 "It's no coincidence that Samsung's latest products look a lot like the iPhone and iPad, from the shape of the hardware to the user interface and even the packaging," Martin Kuderna, an Apple spokesperson, wrote in an e-mail to Deutsche Welle. "This kind of blatant copying is wrong, and we need to protect Apple's intellectual property when companies steal our ideas."

For its part, Samsung denies infringement.

"Samsung is disappointed with the court's decision and we intend to act immediately to defend our intellectual property rights through the ongoing legal proceedings in Germany and will continue to actively defend these rights throughout the world," Rachel Jones, a Samsung spokesperson, wrote in an e-mail to Deutsche Welle.

Under EU law, nearly any civil court across the 27-member bloc has the power to grant injunctions for community design cases.

One legal analyst speculated that Apple chose the Regional Court of Dusseldorf because it stood a high chance of having an aggressive injunction immediately put into effect.

"Another factor is that it's an EU-wide intellectual property right, there is still fundamental differences in civil procedure," Mueller added. "In Germany, you can obtain these injunctions on a unilateral basis. That isn't possible in other places."

E-books growth slow as Germans stick to ink and paper

While online bookseller Amazon now sells more e-books than paper ones in the US, in Germany e-books are still a niche product. There are both cultural and business reasons behind the low popularity rating, experts say. (08.06.2011)

A Berlin team is asking iPhone users to donate their tracking data as a way to make a bigger map of WiFi and mobile phone towers all over the globe. So far, they have several hundred sets. (09.05.2011)

Apple's iPhone and iPad have secretly been saving a complete, unencrypted history of location data for nearly a year now. Privacy advocates say the practice is irresponsible, and authorities question its legality. (21.04.2011)