A fire at an apartment complex in the southwest German town of Backnang has killed eight people, including seven children, police said. Authorities are still investigating the cause of the blaze. 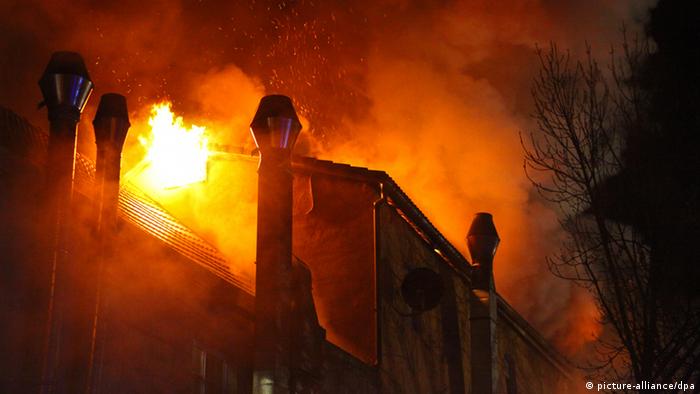 Fire crews found seven of the bodies on the second floor of the building, police spokesman Klaus Hinderer said. The victims had not yet been identified, and a further three people were being treated for injuries in the hospital though they were not in danger of losing their lives.

The fire began at around 4:30 a.m. (0330 GMT), according to Hinderer. The building, which is located 30 kilometers (18.6 miles) northeast of Stuttgart in the state of Baden-Württemberg, is part of a former leather factory that was converted into a row of three-story apartment blocks. Thirteen people are believed to have lived in the complex.

A Turkish-German cultural association has an office in the building's ground floor, police said, adding that the victims were of Turkish origin. A spokesman for Turkey's Ambassador to Germany, Hüseyin Avni Karslioglu, told the DPA news agency that the ambassador was traveling to the scene of the blaze. The Turkish general consulate in Stuttgart, Mustafa Türker Ari, had arrived at the scene on Sunday morning.

Investigators looking into the source of the fire were focused on a furnace as possibly being the cause. There was no indication the fire was set deliberately, investigators said.

"There are no indications of arson or a xenophobic motive," police said.

The Deputy Prime Minister of Turkey, Bekir Bozdag, wrote on the social media website Twitter on Sunday that he expected an explanation for the blaze that "leaves no room for doubt."

In 1992 and 1993 eight people were killed in total after attacks on houses in northern Germany inhabited by residents of Turkish origin. After a deadly fire 2008 fire in Ludwigshafen that took the lives of nine Turks, allegations were raised in Turkey that that blaze might have been set by neo-Nazis.

In 2011, it emerged that a far-right terrorist group the National Socialist Underground (NSU) had been behind the murders of eight Turks and a Greek between 2000 and 2006. Those murders prompted questions from Turkey over the level of xenophobic violence in Germany.