Anti-US protests rage on in Afghanistan

Afghan President Hamid Karzai has urged the US to cooperate fully with an investigation into the burning of copies of the Koran at a US air base as protesters raged against the West all across Afghanistan. 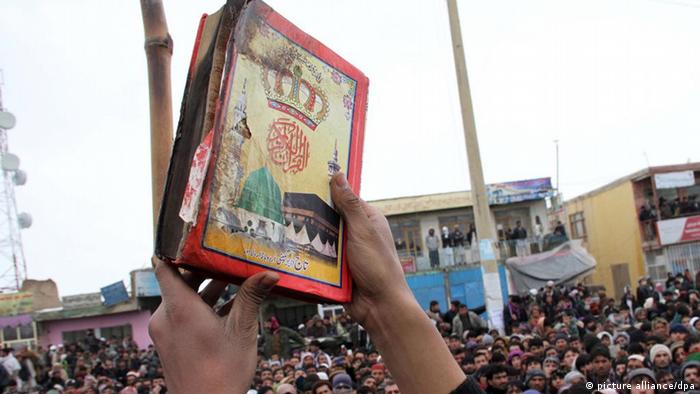 Thousands of angry protesters once again took to the streets of Kabul, Jalalabad and Herat on Wednesday, a day Afghan laborers found charred copies of the Koran while collecting rubbish at Bagram Air Base.

Commander of NATO-led forces in Afghanistan (ISAF), John Allen apologized on Tuesday for the “inappropriate treatment” of holy materials and ordered an investigation into the incident, which he said was not “intentional.” He also issued a directive ordering all coalition forces in Afghanistan to undergo training for the “identification of religious materials, their significance, correct handling and storage.”

President Hamid Karzai also called for the prison to be transferred over to Afghan control as soon as possible to prevent such incidents in future.

But that did not do well to appease some people, as protesters burned tires, threw stones and chanted: “Death to America, death to Obama, death to Karzai.”

A student on the market place in Jalalabad shouted: “we the students of the Islamic University of Nangarhar condemn those who have offended Islam and those who are responsible for burning the Koran. We call for justice.”

Another protester reported police violence in Jalalabad. “We were demonstrating when the police appeared and shot at us. Four people were injured.”

On Tuesday, US forces had used rubber bullets to disperse the crowds but on Wednesday, Afghan forces used real ones. By mid-afternoon, five demonstrators had been killed and dozens injured.

Siddiq Siddiqi, spokesman for the interior ministry, was unable to confirm the number of casualties. “Our holy book was desecrated and Afghans cannot accept this,” he said. “That's why people are angry. We know that this act cannot be justified but demonstrations must be peaceful and nobody should be injured.”

Playing into the Taliban's hands

Aziz Raf'ie from the Afghanistan Civil Society said the incidents would serve the Taliban's cause: “They will say that they agree with the demonstrators, that the US is desecrating our holy objects, insulting our faith and burning our most holy book. The political consequences are much worse than the crime itself.”

Radical groups in Pakistan and Iran could also benefit from the situation. Political scientist Tufan Waziri thinks the matter might herald a change in US-Afghan relations. Kabul and Washington are currently negotiating a partnership that would go beyond the withdrawal of international troops in 2014 but neither Islamabad nor Tehran approve of this project.

“Both of Afghanistan's neighbors fear their position will be weakened by a long-term US presence in the region. That's why they both want the US to lose respect in Afghanistan and to fail,” Waziri told Deutsche Welle.

He also criticized the US, which had not understood that the people in Afghanistan need partners and not an occupying power that does not respect their culture. He said Washington could cause its own defeat in Afghanistan if incidents like the recent one at Bagram continued to happen. In the end, says Waziri, Kabul and Washington will have to decide whether they want to fight the Taliban and other extremists or the Afghan people.

At least three protesters have been killed and more than 17 wounded during clashes with police in Afghanistan. NATO's apology over the inadvertent burning of copies of the Koran failed to quell the unrest. (22.02.2012)

Thousands of angry Afghans chanted anti-Western slogans outside the largest US-run airbase in the country on Tuesday after reports NATO troops had set fire to copies of the Muslim holy book, the Koran. (21.02.2012)