Anti-piracy measures for sale in Hamburg | Business| Economy and finance news from a German perspective | DW | 25.10.2010

The hijacking of two ships over the weekend highlights the difficulties Western navies face combating piracy off the coast of Somalia. Many shipping lines are turning to private security firms for protection. 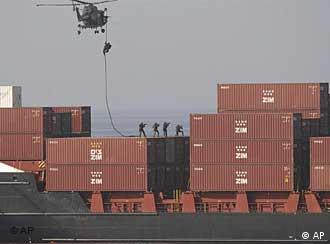 When it comes to global shipping, there is no avoiding the Gulf of Aden, which leads between the failed state of Somalia and Yemen - a nation security analysts describe as at-risk. These waters carry a significant share of the world's wealth, including 11 percent of the world's seaborne oil.

The 25,000 cargo ships that pass through the Gulf of Aden every year are tempting targets for heavily armed groups in Somalia, who claim overfishing by foreign vessels has robbed them of their livelihoods.

Earlier this year the International Maritime Bureau warned that attacks on merchant shipping are on the rise. European defense officials say Somali pirates are currently holding 20 ships and more than 400 crew for ransom off the Horn of Africa. 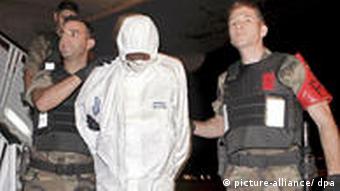 One of them is International Bodyguard and Security Agency (IBS) - a company founded by Horst Ruetten, formally of the German navy.

From his office in the port city of Hamburg, Ruetten delivers an impressive sales pitch: "We offer everything from risk assessment for ships through to advice about equipment – razor-wire and bullet-proof blankets, everything that can help protect the crew - all the way to training."

Ruetten also sends out teams of between five and seven men to guard the ships personally. They are armed with what he describes as "lethal" and/or "non-lethal" weapons, depending on the shipping company's wishes. These teams cost several thousand euros a day.

There is of course a state military presence off the coast of Somalia – Operation Atalanta, the official EU naval mission that occasionally makes the news when it storms hijacked ships and arrests pirates. But Juergen Strohsal, of the Hamburg-based cargo brokering company Teutonia, says that the political will behind this intervention is too weak.

"There is support, but not sufficient," he told Deutsche Welle. "There are no results. If they get some of the pirates, no-one really punishes them, and they come back in force. I think the politicians have to do more about this, especially in our country."

Horst Ruetten agrees, and points out something seldom mentioned in media reports about captured pirates: Atalanta's official mission is to protect World Food Program ships carrying aid to Africa. It is not meant to be a nautical police force for the Gulf of Aden, and generally intervenes only once a hijacking has taken place. This has undoubtedly had a preventative effect, but prevention is not its purpose.

"In the anti-piracy conferences that happen every now and then, a lot of Atalanta spokesmen have told shipping companies 'You have to do something about it. We can't be everywhere at once,'" Ruetten says. "So the shipping companies have to ask themselves what they can do. That doesn't happen enough." 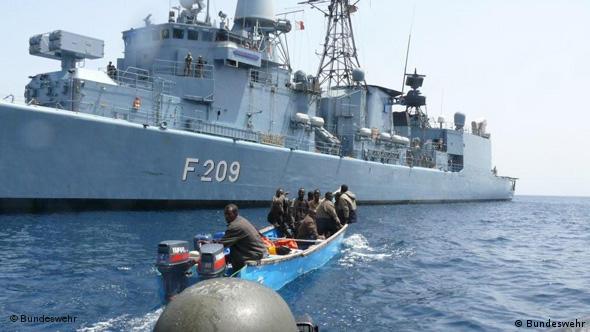 Operation Atalanta's mission is to protect food shipments to Somalia

All mannequins on deck!

A recent survey of 110 German shipping companies by PWC (formerly PriceWaterhouse Coopers) found that 12 used private security agencies in some capacity. Ruetten believes this is not nearly enough, and that too many companies rely on improvised defense measures like strapping mannequins to strategic positions on deck to make a ship look like it is being guarded.

But the official line in the shipping industry is very cautious. Max Johns, spokesman for the Association of German Ship-owners (VDR), says that shipping companies are advised not introduce armed escorts on to their ships.

"By the law of the sea, only military personnel should act against pirates. That is the first point," Johns says. "Secondly we don't know these private security teams. We don't know how good they are, and we don't who to trust and who not to trust. They might have a fire-fight with the pirates - our crews are not trained to act in a military or semi-military conflict."

The fear is that if a security guard killed an innocent Somali fisherman, it would cause a damaging legal headache for the shipping industry. Johns also questions how effective mercenaries really are when push comes to shove.

"They haven't proven successful," he says. "There were quite a few of those teams on board ships, and we had some incidents when those ships were boarded by pirates, and those people didn't help at all." "

"They didn't make any difference. They even jumped overboard, because they didn't want to get caught by pirates, and they were picked up then later out of the water by the navy."

Johns is optimistic that vulnerable merchant vessels will soon have EU military personnel on board, but until then Ruetten and his team of professionals will continue making profits by running the gauntlet in the Gulf of Aden.

Pirates capture two ships with German crew in as many days

Somali pirates have seized two ships off the Kenyan coast in as many days, both with Germans on board. The German Shipowners' Association has responded by calling for tougher action against pirates. (24.10.2010)

On an EU pirate-hunting mission, vigilance is key

As part of the EU NAVFOR mission, the Spanish warship Infanta Christina is patrolling the shipping lanes off the coast of Somalia. The patrol ship and its crew are also there to protect UN food-aid shipments. (07.10.2010)

The international military effort to curb piracy has not improved the situation off the horn off Africa. A study released in Germany suggests that piracy remains a flourishing and safe enterprise for the pirates. (21.07.2010)