In March 2012 Tuareg rebels seized control of large parts of northern Mali. Among them were members of Islamist group Ansar Dine. They want to impose a radical version of Islam which is unfamiliar to local people. 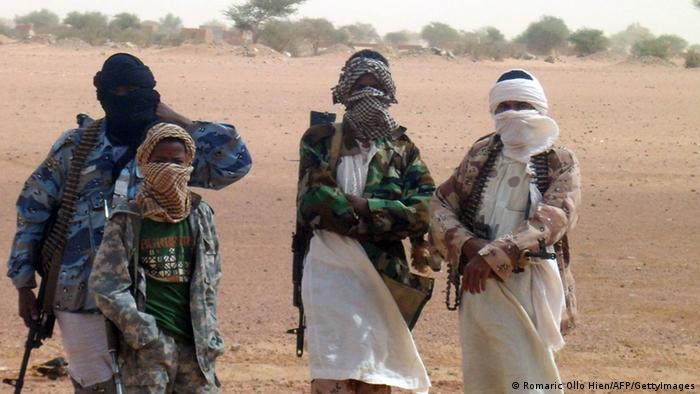 The origins: the battle of the Tuareg

Conflict between the central government and the nomadic Tuareg has repeatedly flared up in northern Mali for decades. At the center of the dispute is the Tuaregs' desire for more autonomy. The Ansar Dine militia was founded in 2012 around charismatic leader Iyad Ag Ghaly, a respected Tuareg from the Ifoghas ethnic group. In the 1990s, Ghaly was a commander of a rebel group and also acted as an intermediary when the Malian government negotiated with "Al Qaeda in the Islamic Maghreb" (AQIM) for the release of hostages. What distinguishes Ansar Dine from other Tuareg militias is its religious orientation. Its members are adherents of the conservative Muslim branch of Salafism.

Ghaly previously had close ties with the National Movement for the Liberation of Azawad (MNLA), a secular oriented rebel group, and according to some sources, he tried to take control but without success. Some observers also suggest it was then that Ghaly, with the approval of the Algerian security apparatus which was seeking a dialogue partner amongst the Malian rebels, founded Ansar Dine. Such rumors, however, have not been independently verified. Less controversial is the fact that the militia receives support from Saudi Arabia and Qatar, countries where Ghaly himself lived for some time. 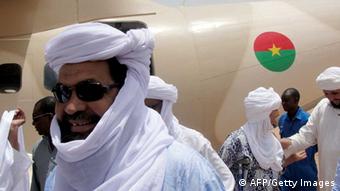 Iyad Ag Ghaly is the founder and head of Ansar Dine

When Tuareg rebels conquered northern Mali in March 2012, Ansar Dine was on the side of the MNLA. But while the MNLA's goal was direct control of the territory and in negotiations repeatedly called for the autonomy of northern Mali, Ansar Dine, the self-proclaimed "defenders of the faith" were more concerned with imposing Islamic law. The dispute turned into a battle from which the Islamists emerged victorious. In early July, Ansar Dine destroyed seven mausoleums in Timbuktu which were part of the UN World Heritage. In January 2013, the militia took control of large parts of northern Mali, including the major cities of Timbuktu and Kidal.

Ansar Dine can be differentiated from other Islamist groups in the region, such as AQIM or MUJAO (Movement for Oneness and Jihad in West Africa), by its local roots. Its followers come mainly from Ghaly's Ifoghas-Tuareg and northern Malian Berber Arabs. However, because of its strict interpretation of Sharia law, the group has gained many enemies amongst moderate Muslims in northern Mali.

Changing alliances between different groups make it difficult to estimate the number of their followers. However, unlike the MNLA militia, which still controls some parts of northern Mali, Ansar Dine has recently become less significant. It is now fragmented and has lost members to the Council for the Unity of Azawad (HCUA) and other new militia groups. Experts say Ansar Dine, which used to have over several thousand members, now has only a few hundred. Its leader Iyad Ag Ghaly, however, still retains some influence.

Life in Timbuktu after the Islamists

Three months after French forces liberated Timbuktu from Ansar Dine Islamists, life in the historic city is still not as it was. Many residents are still coming to terms with their experiences. (08.05.2013)

The United States has declared Ansar Dine a terrorist organization and placed it on a black list. The Mali Islamist group seized much of the country's north last year, prompting a French-led intervention in January. (22.03.2013)