Not generally considered a leader who exudes sexiness, Angela Merkel, made quite a splash with the plunging neckline of the evening dress she wore at the opera in Oslo. Is she taking a cue from France's Carla Bruni? 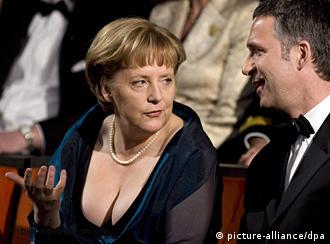 Merkel showed off more flesh than usual in Oslo

Merkel's office has been flooded with questions about the more-than-usual amount of chancellor cleavage on display in the Norwegian capital. At the weekend inauguration of the Oslo Opera House, Merkel wore a très décolleté black dress with a blue bolero.

The dress stole some of the limelight from crown princesses Victoria of Sweden and Mette-Marit of Norway, who generally outshine Merkel in the glamour category by a substantial margin.

"Guests were asked to wear evening dress," government spokesman Thomas Steg told a government briefing. "That this dress caused such a furor seemed excessive to the chancellor."

He said that Merkel was sorry if she had diverted attention away from the royals, adding that the chancellor was shocked about the extent of the coverage, although she was not really upset about it, since most of the reports were complimentary.

"But if the world has nothing more important to do than to talk about or report on evening dresses, what can one do?" he said.

Merkel is certainly used to less flattering coverage of her appearance. In the 1990s, her pageboy haircut and sensible shoes made her the butt of jokes. In 2006, the British tabloid the Sun published photographs of Merkel changing into her bathing suit, her rear end partially exposed.

While Merkel's style has softened as chancellor, the 53-year-old is not considered a fashion trailblazer with the black trousers and boxy jackets she has almost made her uniform.

So some commentators wondered if the dress signalled a general change in style. But the newspaper Die Welt quoted the chancellor's dressmaker, Anna von Griesheim, as describing Merkel's dress style as "power suit in the day, princess at night."

Hamburg's Historic Brothel to Switch Off the Red Light

Sex will always sell but the way it is sold is changing rapidly. In a world of instant gratification, the traditional approach to prostitution seems archaic to some. The changing times are not welcomed by all. (20.03.2008)

With eating disorders on the rise in Germany, a new campaign has been launched to force a change of attitude in the media. The organizers have enlisted some heavy-hitters to add weight to the crusade. (14.12.2007)

What do you think of Angela Merkel's dress? Please include your name and country in your reply.