Analysis: EU Under Pressure to Be Tough With Russia | Europe| News and current affairs from around the continent | DW | 13.08.2008

The EU is under pressure from new members, and a few old ones, to drop its usual diplomatic approach towards Russia and deal more forcefully with its biggest neighbor after Moscow's military campaign in Georgia.

Ever since the European Union expanded deep into former-Soviet territory in 2004, the debate over how it should deal with Moscow has been stormy.

Even in times of peace, the disputes within the bloc have been obvious, with newcomers such as Poland repeatedly urging it to crack down on what it sees as unacceptable Russian behavior, and Western powers equally keen to maintain cordial diplomatic ties.

After the conflict between Georgia and Russia, which broke out on Aug. 8, the internal EU dispute over how to deal with Moscow seems to be threatening a genuine autumn tempest.

"I am sure we will have a very tough discussion about EU-Russia relations in the future," Finnish Foreign Minister Alexander Stubb said drily on Wednesday, Aug. 13, ahead of an emergency meeting with EU colleagues on the Georgian crisis. The EU is keen to resolve disputes diplomatically with Russia, its key energy supplier

Since 2004, the EU has made huge efforts to reach an amicable resolution to any dispute with its biggest neighbor -- and its biggest energy supplier.

EU heavyweights such as Germany argue that such a stance is vital since any move that antagonizes the Kremlin will make it harder for the two sides to work together for European peace.

It would be better and more effective to "keep channels to Moscow and Tbilisi open" than to make "strong statements and one-sided condemnations," German Foreign Minister Frank-Walter Steinmeier said at the Brussels emergency meeting.

But with many EU members expressing outrage at Russia's actions in Georgia, that stance is now coming under real pressure.

"I'm sure what happened in Georgia will change the level of relations between the EU and Russia," Estonian Foreign Minister Urmas Paet said. "I would say it is impossible that everything continues as if nothing had happened."

Diplomatic clashes between Russia and new EU members such as the Baltic states and Poland are nothing new.

Both Poland and Lithuania initially vetoed talks on a Partnership and Cooperation Agreement (PCA) with Russia because of trade disputes with Moscow. In 2007, Estonia had a bitter row with Moscow over the removal of a Red Army war memorial from Tallinn.

The EU treated those disputes as essentially bilateral, isolating the troublesome issues and allowing the bloc as a whole to continue its diplomatic approach to Russia. 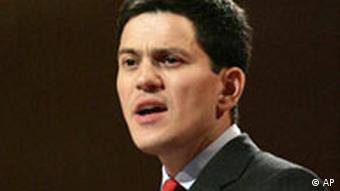 David Miliband has accused Russia of "blatant agression" against Georgia

But Wednesday's meeting saw that pattern dramatically altered. EU veterans and heavyweights such as Swedish Foreign Minister Carl Bildt and Britain's Foreign Minister David Miliband joined the newcomers in condemning what they see as Russia's "disproportionate" use of force.

"Some states which were maybe too idealist (towards Russia) in the past have also realized that the EU should be clearer and stronger," Paet told German news agency DPA after the meeting.

Getting EU heavyweights on board a challenge

That shift in attitude, if it lasts, has the potential to change the whole dynamic of EU-Russia relations.

But hard-liners must first overcome the resistance of the EU's biggest players, Germany and France -- both of whom have strong commercial links with Russia.

And with France now holding the EU's rotating presidency, and set to host a summit with Russia in the autumn, the battle over how the EU should deal with Moscow promises to be a stormy one.

The Cold War lines between Russia and the West are being re-drawn according to European newspapers -- this time over the breakaway provinces of South Ossetia and Abhazia in Georgia. (13.08.2008)

Analysis: What the Future Holds for Russia and Georgia

Russian President Dmitry Medvedev has ordered his army to end its war against Georgia -- for now. Author and political scientist Stefan Wolff talked to DW-WORLD.DE about the conflict, its repercussions and the future. (12.08.2008)

Caucasus War Will Have Long-Term Effects on Ties to Russia