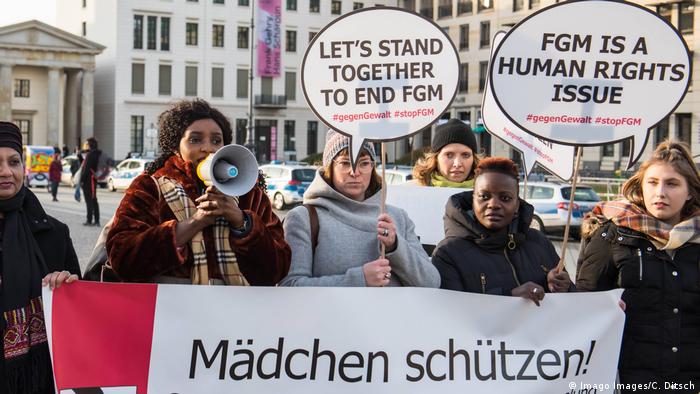 Almost 2,000 patients in Germany last year were diagnosed with genital mutilation in need of treatment, a women's rights group said on Friday, demonstrating a sharp increase in recent years.

The figure is up almost 40% compared with 2016, when around 1,300 diagnoses of people who had previously undergone female genital mutilation (FGM) and were in need of treatment were made, according to The TaskForce for effective prevention of FGM.

The TaskForce conducted a survey of German physicians associations and the results showed that roughly 200 of those diagnosed were minors — half of whom were younger than 12.

The research included females who received outpatient care by statutory health insurance providers. Cases discovered during inpatient stays in hospitals, or during private medical treatment, were not included.

Kenya: Traditional beads and the fight against FGM

"What we see from these figures is only the tip of the iceberg and represents perhaps 2 to 5% of the actual mutilation victims who live in our country, because political leaders do not want complete data collection," TaskForce's founder, Ines Laufer, said of the current situation in Germany.

The rights group estimates more than 20,000 girls may have undergone FGM because they or their parents "come from countries with an FGM rate of over 75% such as Egypt, Ethiopia, Eritrea, Sudan, Mali and Somalia and others" the TaskForce website states.

The unusually large numbers of migrants allowed into Germany from the Middle East and Africa in 2015 and 2016 is thought to help explain the uptick in known FGM numbers in Germany in recent years.

"We call for the implementation of state protective measures, such as regular medical checks and the introduction of mandatory medical reports to the law enforcement authorities if genital mutilation is found in underage victims," Ines Laufer said.

FGM, also known as female genital cutting (FGC), is a practice that involves the partial or total removal of the female genital organs, such as the clitoris or labia, for non-medical reasons.

As well as severe bleeding, FGM can cause a variety of health issues, from infections and cysts to infertility and complications in childbirth. It can also result in an increased risk of newborn deaths, according to the World Health Organization.

Campaigners against Female Genital Mutilation (FGM) say that the coronavirus pandemic has had a negative impact on efforts to curb the practice. FGM remains common despite being criminalized in many countries.

A doctor who performed female genital mutilation on a nine-year-old girl in the northern Caucasus republic of Ingushetia is on trial. Human rights activists hope the case can help to outlaw the abuse in Russia.