The suspect, a 36-year-old man from Kosovo, was detained in Düsseldorf following a brief manhunt, senior police official Dietmar Kneip said at a press conference on Friday.

Nine people were wounded when the man allegedly began lashing out at train passengers with an ax on Thursday night.

The man was captured after he jumped off a bridge while trying to evade police and suffered serious injuries. He was taken to hospital for treatment.

Kniep said police had ruled out terrorism, and that the alleged attacker appeared to be suffering from mental illness.

"He said in a first interview that he was trying to get police to shoot him," Kneip said. "We call it 'suicide by cop'."

"There is no evidence at all of any religious or political motive at all," he added.

Medical documents found at the suspect's home in the nearby city of Wuppertal indicated that he had been diagnosed with paranoid schizophrenia, police said. The man's brother said he had purchased an ax last week because he thought he was being followed.

The suspect reportedly first attacked several people on a local train as it arrived at Düsseldorf's central station, then continued his rampage on several platforms and in the main hall of the building.

According to Düsseldorf police, four female passengers, including two Italian tourists and a 13-year-old girl, as well as five men, were injured. Four of the nine victims were seriously wounded but none were in a life-threatening condition. 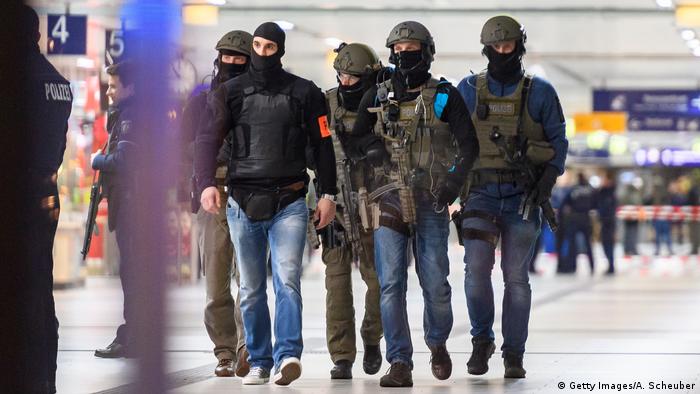 A large contingent of police was sent to Düsseldorf's central station.

Prosecutors said the alleged attacker, who came to Germany in 2009, would be charged with nine counts of attempted manslaughter.

Authorities were alerted to the attack shortly before 9 p.m. local time (2000 GMT), prompting a large-scale response, with nearly 600 police officers sent to the scene. The station was evacuated and sealed off during the manhunt for the attacker. It remained closed for several hours. All trains running through the station were cancelled or rerouted. A helicopter circled over a building in the center of Düsseldorf, the regional capital of North Rhine-Westphalia.

DW reporter Mark Hallam said via Twitter that many people remained near the station on Thursday night, "hoping to get home later."

At 12.45 a.m. local time, the train station was reopened with exception of sites where people had been attacked. Düsseldorf police announced on Twitter that the "main station has been largely reopened." By Friday morning the station was operating as normal with Deutsche Bahn reporting no delays.

Federal chancellery minister Peter Altmaier tweeted: "Whatever happened at Düsseldorf's main station, our empathy and thoughts are with the innocent injured."