Germany’s defense minister is coming under fire over a decision to buy more than a dozen helicopters for the navy. This came as parliamentary inquiry into the cancellation of a drone project, was to wrap up its work. 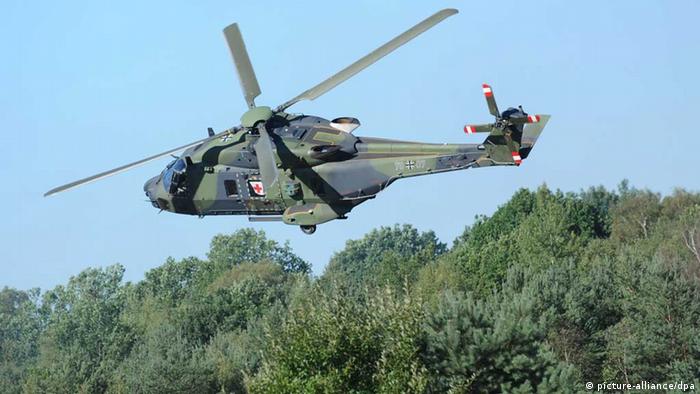 A German newspaper report has said that Defense Minister Thomas de Maiziere opted to go ahead with plans to purchase new helicopters despite the tender process having been flawed and the fact that the model chosen had been deemed unsuitable for the job.

The article, published in this Monday's edition of the Frankfurter Allgemeine, cited a secret report by the Bundeswehr armed forces, which stated that the NH90 is not the "multipurpose-capable helicopter" that the navy is looking for. It said the plan was to buy 18 of the choppers, in the "NFH NGEN Sea Lion" version.

The newspaper report also pointed to irregularities in the decision to award the contract to Eurocopter, a German-French-Spanish company, which makes the NH90.

The Bundeswehr report from July 2011 that the paper cited, said that following the tendering process, the navy recommended the purchase of helicopters made in Germany under license from the American company Sikorsky. However, the defense ministry cancelled the bidding process in October of that year, citing a lack of funds to finance the project.

The paper said that the defense ministry decided in March of this year to revive the project, awarding the contract to Eurocopter, this time without putting it out to tender. It said the decision came without the issue having been debated in parliament, which the Bundestag's defense committee had demanded.

The budget committee signed off on the deal at the end of June.

The Sea Lions themselves are to cost the government 915 million euros ($122 million), but senior navy officers estimate that there would be around 2.75 billion euros in other costs associated with their purchase.

The report also quoted opposition politicians who criticized the decision to go with Eurocopter.

The Social Democrats' defense critic, Hans-Peter Bartels accused de Maiziere of a "collusive game with the defense industry at the cost of the operational capabilities of the navy."

The newspaper report came on the same day that a parliamentary committee looking into the ill-fated Euro Hawk drone project was to wrap up its work.

The defense ministry, which had already spent more than 600 million euros ($860 million) on the project, cancelled it back in May after the drone failed to receive permission to fly in German airspace. An estimated half a million euros would have been required to modify the aircraft to meet the requirements of European aviation authorities, with no guarantee that they would certify it in the end.

The opposition have accused the defense minister of wasting tax payers' money by being too late to pull the plug on the project. Chancellor Angela Merkel's conservative coalition has said de Maiziere acted appropriately.