The Algerian prime minister has said that 37 foreign hostages were killed during the standoff with Islamist militants at a gas plant in In Amenas. He said at least one Canadian was among the hostage takers. 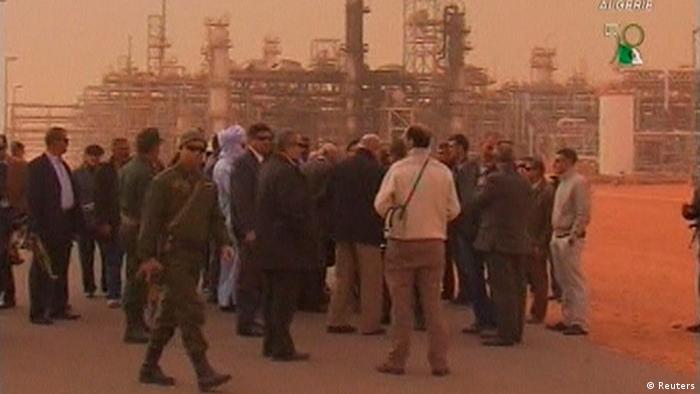 He said the kidnappers came from Egypt, Canada, Mali, Niger, Mauritania and Tunisia, adding that 29 kidnappers were killed and three captured alive.

Sellal told the news conference that a Canadian had coordinated the attack by militants who seized an Algerian gas field near the Libyan border and held foreign workers hostage until the Algerian military stormed the plant on Saturday.

"A Canadian was among the militants. He was coordinating the attack," Sellal said, adding that the raiders had threatened to blow up the gas installation.

Canada's foreign affairs department said it was seeking more information on the matter.

Sellal said the militants had planned the attack two months ago in neighboring Mali, where French forces began fighting Islamists earlier this month.

The aftermath of the hostage crisis

Sellal said the raiders in Algeria had initially tried to hijack a bus carrying foreign workers to a nearby airport. "They started firing at the bus and received a severe response from the soldiers guarding the bus," he said. "They failed to achieve their objective, which was to kidnap foreign workers from the bus."

American, British, French, Japanese, Norwegian, Filipino and Romanian workers are among the dead or missing.

US State Department spokeswoman Victoria Nuland said on Monday that three Americans were killed in the standoff and that another seven Americans survived the ordeal.

Japan's prime minister, Shinzo Abe, said Monday that seven Japanese citizens have been confirmed dead, while three other Japanese remain unaccounted for. Abe said he was informed of the deaths by Japanese officials in Algeria.

"Japanese people who work at the world's frontiers, innocent people, were victimized. It is extremely painful," Abe said.

The seven were employees of Japanese engineering company JGC Corp.

Mali as a motive

"We in al Qaeda announce this blessed operation," Sahara Media quoted Belmokhtar as saying in a video obtained by the regional website.

The alleged hostage-takers earlier had claimed the attack was in revenge for France's decision to send troops and air power to Mali to help the government battle against Islamist rebels. The Algerian government shared the blame, according to the militants, because it had given France permission to use its airspace.

Some of Algeria's Western allies, particularly those who had citizens being held by the hostage takers, initially complained that they had not been consulted ahead of the military assault. In the aftermath, though, Western governments publicly supported Algeria's decision to use force to end the siege.

US President Barack Obama, British Prime Minister David Cameron, and French President Francois Hollande all came out in support of the Algerian move, blaming what they described as the "terrorists" for the hostages' deaths.

Meanwhile, Algerian Energy Minister Youcef Yousfi has said the In Amenas gas extraction plant would be running again within the next two days. Speaking to reporters following a visit to the plant, Yousfi said the damage the plant had sustained during the seige was negligible and that security would be stepped up before it reopened.

The man behind the Algerian hostage drama

The Mali conflict continues. With a spectacular kidnapping in Algeria, Islamists wanted to stop French military intervention in West Africa. But, the cell intended to achieve even more with their attack. (18.01.2013)