From January 1, 2014, Dr. Alexander Kudascheff will be editor-in-chief of Deutsche Welle. Kudascheff, who currently heads the Berlin studio, will take charge of DW's television, radio and online content. 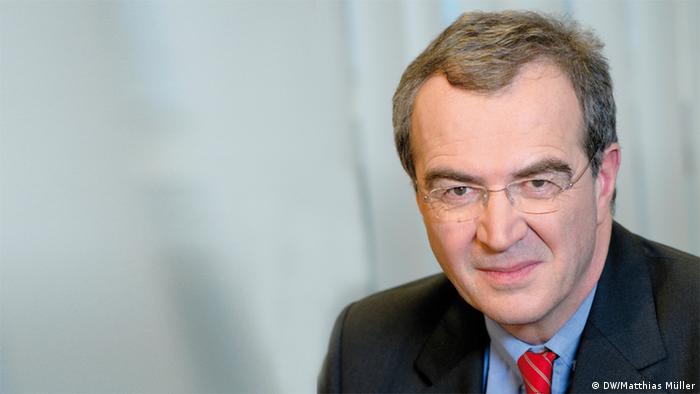 Director General Peter Limbourg said: "This is a further step towards streamlining journalistic content across all media, which will strengthen Deutsche Welle's profile as an information provider in the international media market." On November 1, DW already merged its two programming departments in Bonn and Berlin into one, which is now managed by a single director of programming.

Since 2007, Kudascheff has been in charge of DW's Berlin studio and at the same time acted as a deputy editor-in-chief. Born in Buenos Aires to a Russian father and a German mother in 1951, Kudascheff studied philosophy, history, politics and Islamic studies in Munich, Hamburg and Cologne. After completing a journalistic traineeship, he initially worked in the Middle East department at Deutsche Welle. He later was in charge of reporting on domestic policy, then became chief reporter and finally editor-in-chief of the German-language radio programming before being appointed as head of DW's studio in Brussels in 1998.

Director of Programming Gerda Meuer commented: "I am very much looking forward to working with Alexander Kudascheff, whose extensive experience as a radio, television and online journalist will foster the process of streamlining DW's content." Meuer thanked the outgoing Editors-in-Chief Dagmar Engel (53) and Ute Schaeffer (46) for their excellent work.

Dagmar Engel will retain her status as an editor-in-chief in her new position as head of DW's Berlin studio. Previously, she led Deutsche Welle's TV news service for 15 years and was editor-in-chief of overall TV programming for 12 years." Dagmar Engel was instrumental in preparing and carrying out the successful reform of DW's TV programming. Ever since, DW has been available to viewers around the world in four languages and on six channels. Engel's biggest achievements also include the expansion of what is now a 24-hour Spanish TV channel," said Meuer. Before she became editor-in-chief and head of the news service, Engel had worked in DW's studio in Washington D.C. for two years. In the Berlin studio, Engel is set to expand international reporting on German politics and on the bilateral relationships between Germany and other countries.

According to Meuer, the new position the outgoing Editor-in-Chief Ute Schaeffer will take at DW is still being discussed. Schaeffer has "strengthened DW's regionalized programming and shaped its multilingual online content journalistically," Meuer said.