At least 33 people have been killed in an airstrike on a school sheltering refugees near Raqqa, a monitoring group says. The US-led coalition fighting "IS" is believed to be behind the attack, according to the group. 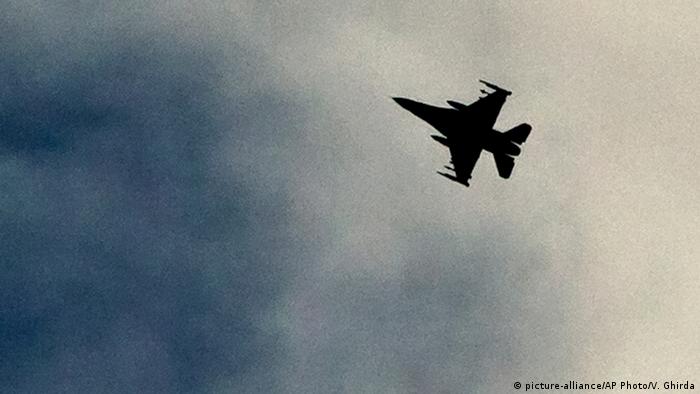 An airstrike on a school sheltering displaced people near the northern Syrian city of Raqqa has claimed at least 33 lives, the Britain-based Syrian Observatory for Human Rights said on Wednesday.

The Observatory, which is close to some groups opposing Syrian President Bashar al-Assad and relies on Syrian contacts to smuggle news out of the country, said the attack on Monday night was believed to have been carried out by the US-led coalition that is fighting the extremist militant group "Islamic State" (IS) in the country. Raqqa is the de facto capital of IS, which is one of the many factions fighting in Syria's six-year-long war. Some of the activists that provide the Observatory with information on the Syrian conflict had counted the bodies of the dead at the site of the strike near the village of al-Mansoura, west of Raqqa, the group said. It said the victims were displaced people from Raqqa, Aleppo and Homs.

The state-run Syrian news agency Sana also reported that dozens of civilians had been killed or injured in the village in a US-led aerial attack.

On Wednesday, a meeting of foreign ministers from the anti-IS coalition under US leadership will take place in Washington, DC. Germany also forms part of the alliance, although it is not involved directly in armed operations.

More than 300,000 people have been killed and half the population displaced since the Syrian conflict erupted in 2011, after initially peaceful protests against Assad turned into all-out war after a brutal government crackdown.

Government troops have resisted an attempt by rebels and Islamists to take hold of the Jobar district. The fighting came as a fresh round of UN-backed peace talks failed to produce a peace deal. (20.03.2017)

Mosul's displaced: 'I'm at the end of my years and have to live in a tent'

As the fighting between Iraqi forces and the "Islamic State" in western Mosul has intensified, thousands have fled the city. In Iraq, Anna Lekas Miller met Moslawis who recently escaped after enduring years of IS rule. (22.03.2017)

Clashes in Damascus after rebel attack